The Association for the Advancement of Sustainability in Higher Education's (AASHE) Sustainability Tracking, Assessment & Rating System™(STARS) is a framework for colleges and universities to measure their overall sustainability performance. In February 2016, Seattle University submitted its first STARS report and achieved a gold rating (with a score of 69.41) from this rigorous benchmarking program. In March, 2018, Seattle University's second STARS report resulted again in a GOLD rating with an improved score of 75.64. View SU's STARS report HERE.

In 2018, Seattle U obtained the #8 place in Sierra's "Cool Schools," up from #48 in 2017. Seattle U was the only university in Washington State to make the magazine’s top 20. The rankings highlight schools that displayed a deep and thorough commitment to protecting the environment, addressing climate issues and encouraging environmental responsibility. The schools were ranked based largely on their existing STARS scores.

Seattle University is also one of 26 colleges and universities out of 648 schools to be named to The Princeton Review's 2019 Green Honor Roll by receiving a score of 99 (the highest possible score). This is the first time SU makes it to the top of the list on the Princeton Review's green ratings. 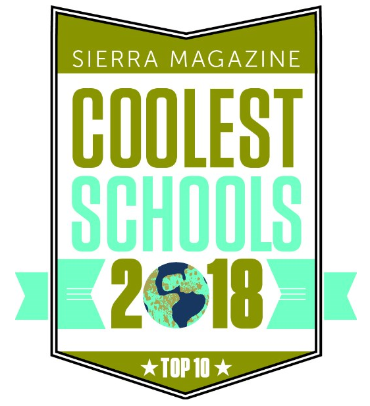