Justice through a Jesuit Lens 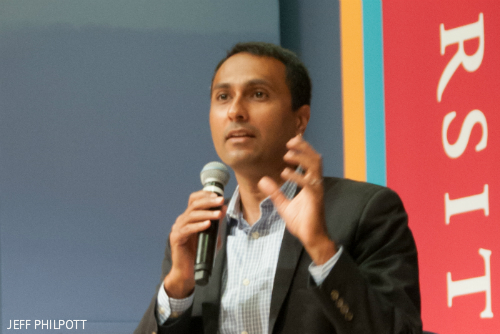 Eboo Patel began his keynote address before a packed-to-the-gills Pigott Auditorium by joking that the talk might not be the one his audience had expected or hoped to hear.

Patel (right) was at Seattle U for a conference on justice that drew hundreds of faculty and staff from Jesuit colleges across the U.S. and beyond.

Launched in 2000, the national gathering has taken place every four years since 2005. The inaugural conference at Santa Clara may ring a bell for some as it featured Peter-Hans Kolvenbach, S.J., then superior general of the Society of Jesus, whose talk, “The Service of Faith and the Promotion of Justice in American Jesuit Higher Education,” is today considered pivotal in clarifying the identity of Jesuit institutions.

The 2017 conference held this month was titled “Through the Eye of the Needle: Commitment to Justice in Jesuit Higher Education.” The gathering drew nearly 430 attendees, representing 27 of the 28 U.S. Jesuit colleges and universities, as well as colleagues from Jesuit institutions in Brazil, Canada, India, Italy and Nicaragua.

Appropriately coinciding with the conference was the publication of the latest Conversations on Jesuit Higher Education. Titled “Sanctuary for Truth and Justice,” the issue examines the roles and responsibilities of Jesuit institutions in the current U.S. political climate and features pieces by four Seattle University faculty and staff, including Pat Howell, S.J., chair of the national seminar that publishes the journal.

Having previously spoken at other Jesuit institutions—and the recipient of an honorary degree from Loyola University Chicago—Patel was warmly welcomed by the crowd at SU, which included some faculty and staff with whom he had previously crossed paths.

Considered a leading voice in the movement for interfaith cooperation, Patel is founder and president of Interfaith Youth Core (IFYC), a national nonprofit working to make interfaith cooperation a social norm. He served on President Obama’s inaugural Faith Council and is author of three books, including his latest, Interfaith Leadership: A Primer (2016).

If attendees were looking for easy answers to the question of what justice means in the context of Jesuit higher education, Patel was not obliging. Instead, he challenged the hundreds of faculty and staff assembled to question and expand their conceptions of justice. Not in a finger-pointing way, but through a series of personal stories that were equal parts self-critical, laugh-out-loud humorous and, ultimately, thought-provoking.

A self-described “multicultural progressive,” Patel acknowledged his own biases—principally his failings to consider the worldviews of those with whom he disagrees. Like the time he met an Iraqi leader and, assuming this person shared his own views, apologized for the U.S. government’s intervention in his country. (It turned out the Iraqi was a Kurd who not only welcomed the military action to topple Saddam Hussein’s regime, but deemed it long overdue.)

His often mesmerizing presentation, which was laden with down-to-earth anecdotes about shoveling snow and Little League baseball, posed such questions as “Doesn’t diversity mean the differences you like and the differences you don’t like?” and, inspired by the writings of Jesuit theologian John Courtney Murray, this: “Isn’t the definition of a diverse society, a society in which different people and communities hold divergent and—Murray’s term—incommensurable views of justice? And isn’t the good society the society that can hold all those people together without having them go to war?

Joining Patel on an impressive slate of keynoters were Rev. Bryan Massingale, S.T.D., theologian at Fordham University specializing in social ethics, with teaching/research interests in the areas of racial justice, liberation theology, and Catholic Social Thought; Sr. Simone Campbell, S.S.S., executive director of NETWORK, a Catholic organization promoting social justice in public policy, and well known for her leadership of the 2012 “Nuns on the Bus” project; and Michael Garanzini, S.J., chancellor and former president of Loyola University Chicago, who serves as the Secretary of Higher Education for the Society of Jesus. Breakout sessions included an additional 140 presentations, with more than 20 Seattle University faculty participating as presenters and panelists.

Many other faculty and staff were instrumentally involved in organizing and putting on the conference, including the Center for Jesuit Education; Conference and Event Services; School of Law; Bon Appétit; Information Technology Service; Arrupe Jesuit Community; President Stephen Sundborg, S.J., and the Seattle University leadership; and Digital Design Associate Professor Naomi Kasumi, who created the conference program.

“It was a privilege to work on this conference, to invite the keynote speakers and session presenters, to reach across the AJCU network and beyond to gather attendees and to welcome them to our Seattle University campus for three inspirational days,” said Joe Orlando, director of the Center for Jesuit Education. “We learned a great deal together, and I know that we all provided one another with insights, encouragement and strength to return to our campuses and communities to carry forward this Jesuit mission of the service of faith and the promotion of justice. SU was in service to our national colleagues in the Jesuit/Ignatian family through this Commitment to Justice Conference, and I’m so thankful to have had the chance to contribute to such an excellent event.”