At Halloween time, zombie stories have a way of inserting themselves into the consciousness of even rational human beings. A local newspaper columnist labels the recent government shutdown "a zombie apocalypse." Zombie movies such as Night of the Living Dead resurface to haunt us. And one of the highest rated TV shows, week after week, is the resurrected The Walking Dead.

In reality, zombies have become part of popular culture that goes beyond Halloween. Just ask SU instructor Henry Kamerling, who teaches a course aimed at freshmen called Zombies: A History of the Undead. It's an inquiry seminar in the humanities that's part of the new Core.

"It's really a straightforward history class, although the topic is boutique," he says, adding, "It definitely shakes up preconceived notions of history."

Maybe you've never paused to consider what it means to be undead. Folk zombies, atomic zombies, apocalyptic zombies-there's a migration and transformation of zombies from one era to the next, from one popular horror flick to another.

Imagine what it would be like to be a student who's searching for insights for a paper that explores modern zombie lore and compares a zombie with the western-style hero, which plays out in The Walking Dead. 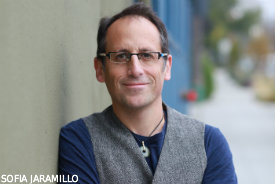 It was the historical nature of crime and punishment that brought Kamerling to thinking how zombies might contribute to a dialogue about national identity. Say what? Think us versus them, he suggests.

"Crime serves an important social function. We aren't 'us' unless we serve a useful function. We need criminals and monsters," he explains.

In keeping with the zombie vs. western hero theme, Kamerling contends "a western hero tames the wilderness to pave the way for the arrival of civilization." He says a zombie, on the other hand, "returns the modern world to a state of wilderness and in doing so expresses a yearning not only for the past but for a return of the western-style hero."

Where's the academic rigor in all of this zombie talk, you may wonder. It's a seminar that aims to tune students to how historians think and pursue knowledge, says Kamerling. Students explore historical questions and examine how several texts-including readings from anthropology, sociology and cultural theory-relate to one another across time.

Zombies offer an inventive way to understand deviance and its expressions in pop culture. As students look for academic insights, they also have opportunities to develop analytic thinking and reasoning skills when they write research papers and prepare for a capstone oral presentation.

In case you're clueless about the undead, you become a zombie by being bitten by one. Nonetheless, Kamerling says, "the zombie plague expresses a fear about globalization, technology and our exposure to other people, places and ideas."

Anxieties about a plague aside, if you feel like a zombie in the early morning, you're in the right frame of mind for this class. It meets at 7:45 a.m.

(The main photo was taken by Kamerling at a Zombie walk in Seattle in 2012.)