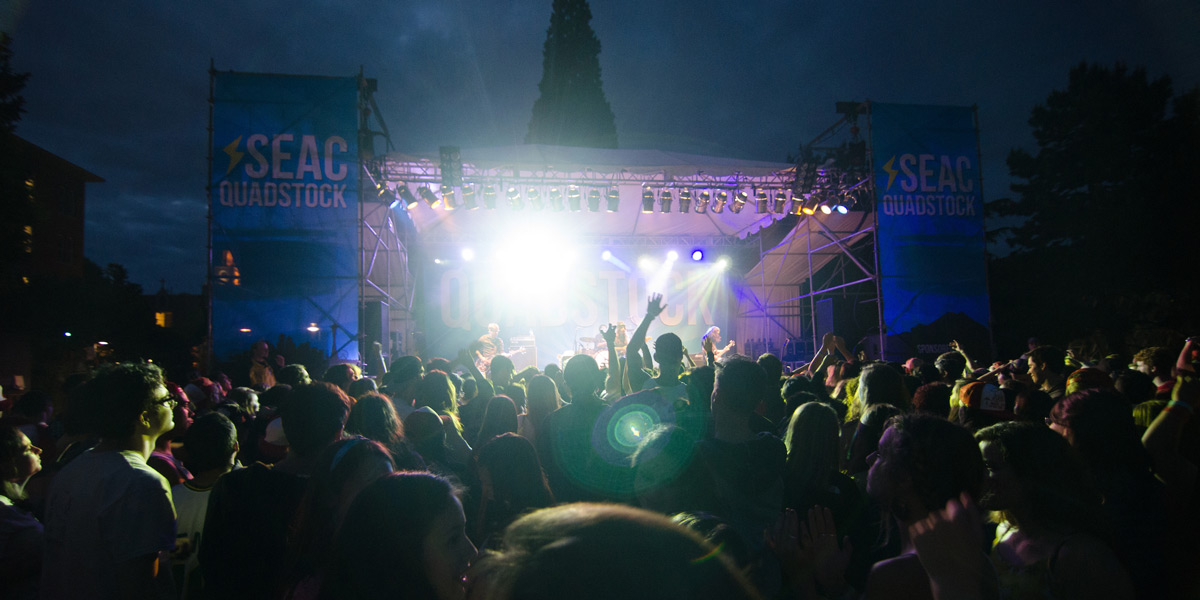 As Quadstock marks 25 years, its founders reflect on the beginnings of this popular SU tradition.

Chris Thomas, '91, and John Boyle, '93, had an idea to continue the excitement around the unveiling of the Quadrangle and the Tsutakawa Fountain, which was formally dedicated in the fall of 1989. Their way to keep the momentum going: create an event to bring students together in community and celebration. The pair, active in Student Activities, was thinking two things: music festival. The space, says Thomas, was right for what they envisioned.

"I looked at that top step area and the expanse of the space in the Quad and said, 'that looks like a stage.'"

What started with an initial idea shared among the two friends and then the activities committee morphed into what has become a springtime staple at SU. Originally Quadstock-the name a mashup of location and a nod to the seminal outdoor music festival Woodstock-spanned three days and included Battle of the Bands.

"We knew a lot of people who played in bands at SU and came up with the idea to do a Battle of the Bands with the winner getting to play on the main stage at Quadstock," explains Thomas.

After the first year, which was by all accounts a success, the guys realized that three days was too much.

But what they put together proved to be a successful template as Quadstock has continued on, with 2014 marking the 25th  year of the event that is a veritable SU tradition. Quadstock is one of the final brouhahas of the academic year, something that is circled on the calendar weeks and months in advance.

Through the power of music-and the fun, festival-like atmosphere that includes games, a dunk tank, arts & crafts and more-community is formed and strangers become friends and new traditions are born.

The success of Quadstock is due in part to its free-flowing, festival-vibe that is structured but doesn't follow a rigid format, says Boyle.

"The format for Quadstock has worked because it's always been about music and friendship and giving back," he says. "It's good, clean fun."

It also helped that Boyle, Thomas and the students behind bringing Quadstock to life had the support from the top in then-President William Sullivan, S.J.

Says Boyle, "Father Sullivan wanted the Quadrangle to be a centerpiece of student life. … He was always behind us."

Quadstock has attracted upcoming and established local and national talent with past performances from The Thermals, Dan Deacon, Del the Funky Homosapien, Talib Kweli, Ok GO, Blue Scholars and pre-Grammy winner Macklemore, to name a few. Boyle puts to rest a long-running rumor (or urban legend?) that Nirvana played the festival. While a call was indeed put into Nirvana's people, Boyle says the band had to decline the offer as they were recording in Los Angeles at the time.

Quadstock is still important to Boyle, who works in mobile products and software development for Dell and Thomas, who is a PR manager at Providence Centralia Hospital. Both plan to attend this year and Thomas put together a Facebook page for alums of Quadstock to get together for a reunion of sorts.