With the help of a number of SU staff and an assist from a former member of the faculty, a disabled man is getting around a little easier.

It all began back in November when Kiana Parker, alternative media coordinator in Disability Services, was planning an accessibility tour of Pioneer Square. Its purpose was to show Seattle City Councilmember Tom Rasmussen how difficult it is for people with mobility challenges to navigate that part of the city. "I saw a man using the bike lane on Yesler Way to get down the hill from Third Avenue to First Avenue. I thought it looked unsafe and I was really curious," said Parker.

Parker stopped him and they began to talk. He explained that he had lost part of both feet to frostbite during the cold winter months and discussed his own experience in traversing Pioneer Square. With the holidays close at hand, Parker asked him what he wanted for Christmas. The man, Keith Lewis, replied that he hoped one day to have a power wheelchair so that he could more easily climb the city's hills.

"His reply got me thinking because I had a power chair that was currently going unused I could give him. It was sitting in my parents' house in Oakland, but had no way of getting it to Seattle," said Parker.

Or so she thought. 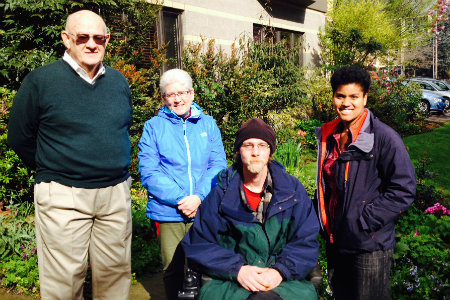 Parker explained the conundrum to David Murphy, house manager of the Arrupe Jesuit Residence. Murphy sprang into action. He received the support of Rector Tom Lucas, S.J., and arranged for a van to transport the chair. All that was needed was a driver. For that, Murphy enlisted the services of one Paul Janowiak, S.J., who was in the Bay Area and scheduled to come up to SU for his sabbatical. (Father Janowiak, who currently serves on the faculty of the Jesuit School of Theology in Berkeley, previously was a professor in SU's School of Theology and Ministry.)

After the chair arrived at SU, Antonio Arteaga and Jay Heitman, maintenance electricians in Facilities, helped Parker order the right batteries and get them installed.  Then Melissa Pico, in Learning Assistance Programs, reached out to the Seattle Disability Community Outreach Group  on Facebook to find someone who could make sure all of the wheelchair's parts were hooked up correctly.  Sean Butterfield, an ally of that organization, donated his time traveling to SU, adjusting the chair and remounting the hand controls for a right-handed user.

"(The chair) opens up new doors," said Lewis after taking it for a spin on the upper mall, adding that he'll now be able to expand his radius when it comes to finding work and increase his earning potential.

Murphy marvels at the energy and commitment of Parker and gives credit to "this network of people connected with the university. This is about a community of people working together."