You may have heard that Pope Francis was in the United States recently.

The visit by Pope Francis, the first ever Jesuit pope, captivated the nation and particularly Jesuit institutions such as ours. Here are some ways SU experienced the papal visit and how it will be a gift that keeps on giving in the weeks and months ahead.

In anticipation of Pope Francis' visit two SU Jesuits (named Patrick, no less) authored articles on the significance of his papacy for America Magazine. Pat Howell, S.J., Distinguished Professor in the Institute for Catholic Thought and Culture (ICTC) wrote Pope Francis Meets the American Catholic Church, and Pat Kelly, S.J., penned An Examen in the Spirit of Pope Francis.

By the way, Fathers Howell and Kelly will speak on the impact of Pope Francis on our nation and university. Sponsored by the Office of Jesuit Mission and Identity as part of the "Moment for Mission" Lunch Series 2015-16, the event will take place 12:15-1:30 p.m. on Monday, Oct. 12, in Chardin 142. RSVP to jesuitidentity@seattleu.edu. Lunch is provided.

Two well-attended campus events were held on Sept. 24: a viewing and dialogue on the pope's historic address to the joint session of Congress (in Pigott Auditorium); and an interfaith response to Laudato Si', the pope's encyclical on climate change (in the Chapel of St. Ignatius). 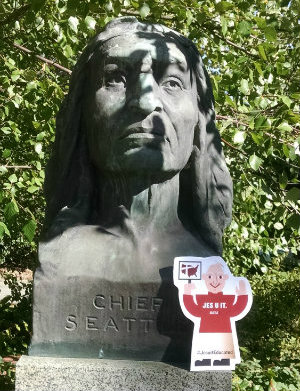 SU Jesuits were active sharing their thoughts on the pope with local media. President Stephen Sundborg, S.J., and Tom Lucas, rector of the Arrupe Jesuit Community offered commentary on the pope's visit, in interviews with such outlets as KING 5, Northwest Cable News and KIRO.

Of Francis' historic trip, Father Sundborg said he expected the pope to "to bring the voice of the poor to the centers of power." In this audio clip, Father Lucas speaks with KIRO's Dave Ross about the canonization of Father Junipero Serra, which took place as part of the pope's visit to the U.S. Father Serra is the first saint to be canonized on American soil.

In National Catholic Reporter, Carmen Gonzalez of the School of Law took up Laudato Si' in a column titled " UN goals fall short of Francis' vision."

Meanwhile, over in the comparatively wacky world of social media, lots of SU folks were getting into the spirit of Pope Francis' visit in a number of ways. Many members of the SU community shared thoughts on Jesuit education as part of the Association of Jesuit Colleges and University's #Jesuiteducated series of reflections. (And for those who didn't have a chance to see it at the President's Welcome, SU students and alumni are featured in this video on what it means to be Jesuit educated at SU.

Others took part in the Flat Francis contest. Some posed with cut-outs of the pope; others placed Flat Francis in notable environments. Pictured here is a photo from Margaret Moore, senior administrative assistant in the Arrupe Jesuit Community, in which she introduced Francis to our city's and university's namesake.

Just because the pope has gone back to Rome doesn't mean the SU community is done talking about him. Oh, we're just getting started!

In addition to the aforementioned Oct. 12 event with Fathers Howell and Kelly, there will be many other opportunities throughout the academic year to engage with topics related to the pope. Here's a couple.