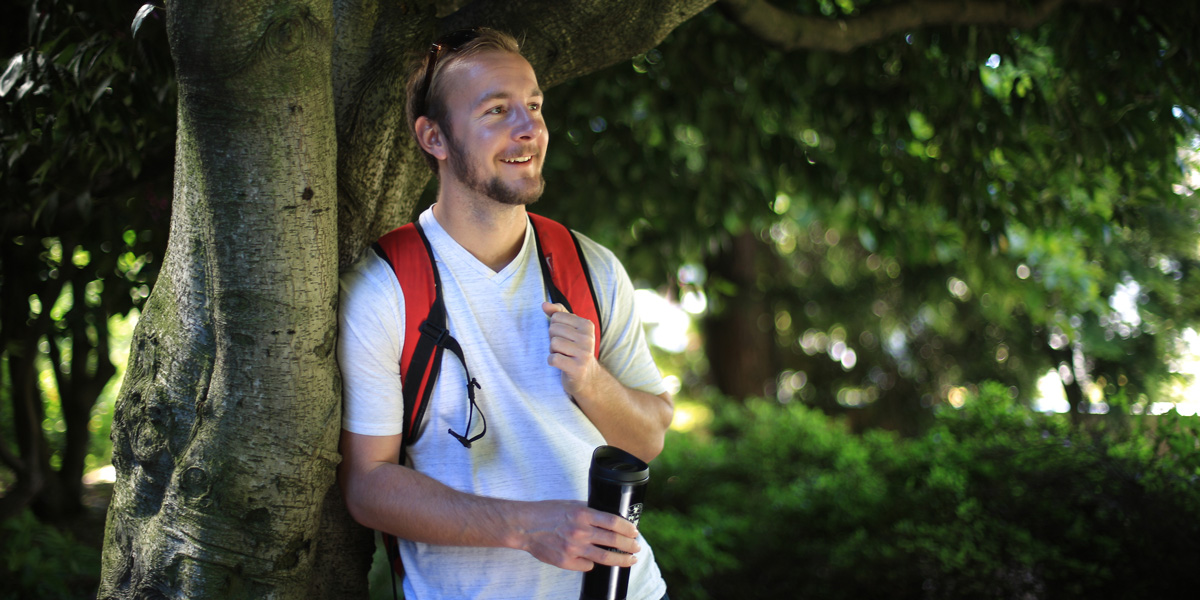 Eric Sype, '15, had a sixth grade teacher in his hometown of Cashmere, Wash., with a knack for spotting a promising leader, one who was ready to step into the limelight of public service. He nudged Sype to become class president. That teacher was onto something.

Soon, Sype ran for class offices and became president of the student body, first at his middle school, then in his high school of 450. A natural leader was born.

"When I came to Seattle U, I thought my involvement in student government should be over, that I would focus on my studies," says Sype, with a shrug that quickly morphs into a wily smile.

Again, he was drawn in and became an at-large representative in the Student Government of Seattle University (SGSU) as a freshman. Today, as student body president, the senior has no regrets.

He's particularly excited about the We the Redhawks initiative, which gives any student the opportunity to write a petition, collect signatures, meet with SGSU leadership and conceivably watch serious or even lighthearted interests gain acceptance on campus.

Sype points to a couple of hot-button issues.

"For several years now, divestment in fossil fuels by the university has been a concern. There is still a large and loud movement," Sype says.

A smoke-free campus is another. It's going to be a huge task, says Sype, for the campus to go tobacco-free. Multiple populations still have to be consulted and due process will be needed.

A Naef Scholar and a peer adviser at Matteo Ricci College, where his major is Humanities for Teaching, Sype is a sports lover-pickup basketball, tennis, kayaking, even fantasy football.

"Fantasy football is mildly embarrassing at times, but it's a relaxing de-stressor for me," he says. He also loves cooking, especially breakfast.

The past two years, Sype's summer job has taken him outdoors-as a deck hand on a fishing tender in Bristol Bay and Southeast Alaska, where he routinely helped weigh, sort and haul fish to canneries, then scrubbed and hosed the decks.

"My time in Alaska has taught me what true hard work looks like," he says. "That will happen when you consistently work 10-, 15-, 20-hour days in tough, dangerous environments. It has also shown me how to apply what I have learned at SU to the world," he says. "While in Alaska, I was constantly questioning what effect the practices of the fishing industry had on the environment, and trying to think critically about the life I was living."

Sype's a realist about why he is student body president.

"I do not see this role as intentionally something I'm doing as a next step for my future," he says. "I'm in this role because I have a great love for Seattle University."

While he wasn't raised Catholic, his dad received his master's in public administration from SU.

"A Jesuit education has opened my mind to things that weren't even on my radar. What do social justice and environmental justice look like in the world, for example? I firmly believe education is the great equalizer.

"I don't think I could ever have a self-serving job after this. There will have to be a mission in my life," says Sype.

Winter quarter last year, SU helped Sype find a program in Nicaragua where he took part in setting up a bike rental company to fund scholarships in the rural town of El Limon Dos. In November, he will make a trek to San Salvador to commemorate 25 years since six Jesuit priests, their housekeeper and her daughter were murdered by members of the Salvadoran Army's elite battalion, the Atlacatl.

His global engagement spurred him recently to apply for a teaching assistantship in Colombia, but Sype hasn't forgotten the powers of observation of Don Smith, that sixth grade teacher of his at Cashmere Middle School. Smith remembers him well, too.

"He was really good at helping substitute teachers make sure they ran my class like I did if I had to be gone," Smith says. "Eric was very dependable. When we had magazine sales, food drives and other volunteer projects, you could count on Eric to do his part and then some.

"He also would share his thoughts on current events and social studies, even if they were different than the rest of the class or even mine. A bit unusual for a sixth grader."