As he stood at the podium and scanned the standing-room-only crowd at Seattle's Elliott Bay Book Co. for his book launch, Joe Guppy shared his sheer delight.

"I've imagined this moment and now it's actually here," said Guppy, '77, '98 MAP, author of My Fluorescent God, a literary memoir about Guppy's 1979 experience as a mental patient. The gathering was a mix of folks, many who knew him much of his life. There were Seattle University psychology professors and other mental health professionals, family members, alumni, students, staff and friends.

Before he read from the book, Guppy thanked those who had helped him through the difficult life experience that became the focus of his memoir. He had kind words for Patricia de la Fuente, now retired, the psychiatric nurse in the mental ward at Seattle's Providence Hospital (now Swedish Cherry Hill) who played a big role in his recovery. He credited SU's Master of Arts in Psychology program for training him so well to become a psychotherapist and helping him make sense of what happened well over a decade before he entered the program. He also singled out the support of his mother Pauline, '49, '69 MIT, and his wife, Nancy Guppy. 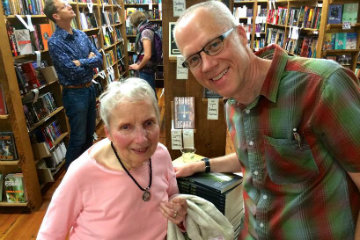 Guppy was 23 when a perfect storm of circumstances, including a reaction to a prescribed medication, pushed him into psychosis and landed him in a mental ward.

"Once I had been transported into psychoville, I had to find my way back to reality. Coming back was both a therapeutic and spiritual journey. I discovered my strength and courage along the way," he says.

Guppy kept a journal-as did his mother-of his six months as a mental health patient. Those, plus his hospital medical records and cassette tapes of 1979 interviews he conducted with caregivers and fellow patients, gave him an extraordinarily well-documented archive for his memoir.

All this was kept in a box labeled "Crazy Period" that moved around with him for 30 years.

Guppy's book describes his experience of mental illness in raw detail-how his reality shifted dramatically, his terror and paranoia, his struggles with conquering a delusion of hell and ultimately rekindling his spirituality.

As he regained confidence, Guppy emerged from his ordeal with purpose and energy.

"Throwing myself into theater and music was tremendously healing, having a community that accepted me and was so life giving," he says.

His work as a writer and performer on TV's local sketch comedy show "Almost Live" was a smash hit. By 1985, he met his wife-to-be Nancy, who went on to a starring role in "Almost Live." 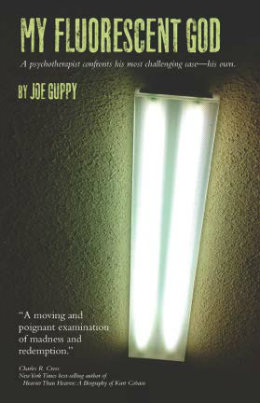 Their success convinced them to head for Los Angeles in 1989, where he wrote and performed for HBO's satirical "Not Necessarily the News" and other shows, but by 1993, he was tired of show biz.

After returning to Seattle, he began to teach writing and improvisation. He also started looking at graduate programs in psychology. It was the SU master's program in existential phenomenological psychology that made the most sense, he says, because it afforded an opportunity to use his literary and theatrical background.

When he finally opened his "Crazy Period" box, the fact that he had become a practicing psychotherapist made it easier to write about the therapeutic aspects of his case. For the book, he also dialogued with other mental health professionals about his story and returned to interview psychiatric nurse de la Fuente and a former Jesuit who had helped him 30 years earlier.

"I do believe that God makes a promise that whatever happens to us can ultimately work out for the good," he wrote.

WATCH FOR IT: Read this and many other stories about the people of SU in the next Seattle University Magazine due out next month.