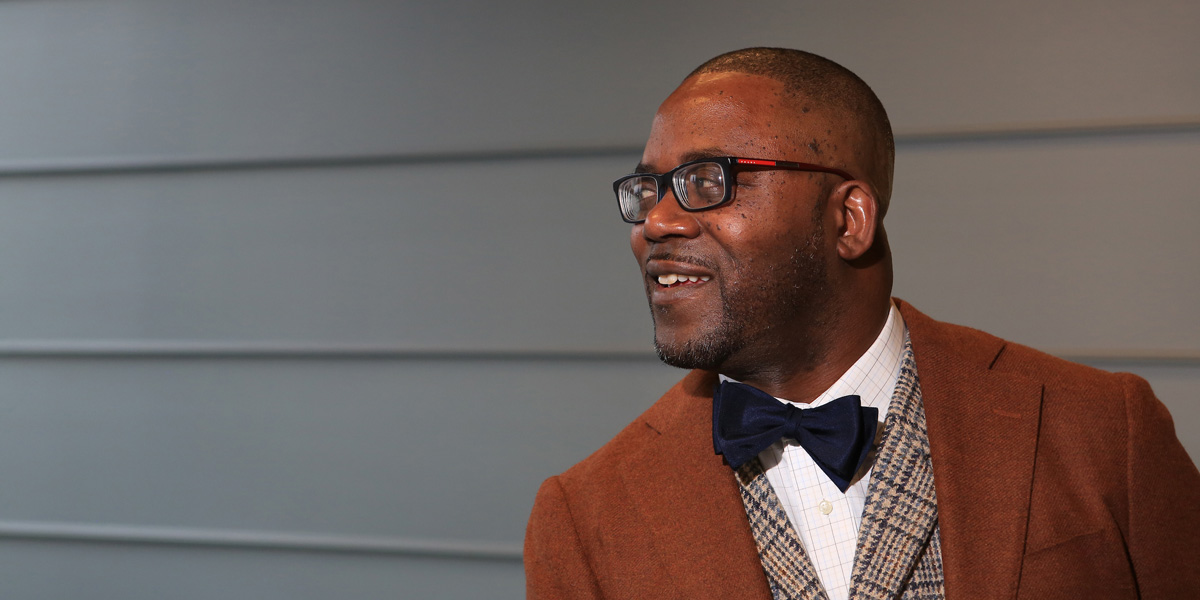 As the recipient of the 2016 William Pincus Award, Bryan Adamson says he appreciates being honored by those he respects highly.

"The clinical law community has always been a special sub-group of law professors, close knit and singularly interested in advancing the cause of legal education. And in doing so, they keep in mind all it means to be a practitioner as well as lawyering for social justice," says Adamson, associate professor in the School of Law.

The national award, the highest honor the Association of American Law Schools (AALS) bestows upon a clinical educator or institution, is named after the late William Pincus, a Ford Foundation executive who had the vision to create and expand legal services for the poor and clinical education for law students all in the name of improved access to justice.

The event, part of the AALS annual meeting last month in New York City, featured opening remarks from Law Dean Annette Clark, additional perspective from a former colleague of Adamson's from his days at Case Western School of Law and an introduction by Lisa Brodoff, associate professor of law and director of the Ronald A. Peterson Law Clinic at Seattle U.

"Brodoff, a musician, composed an homage to me!" Adamson says. "The warm, funny, spot-on lyrics were hers, but the tune was to 'My Favorite Things.' The entire audience sang it! It was amazing.

"It was gratifying to see an audience of about 150 peers from around the country. I was grateful my sister (a retired NYC police officer) and her son were able to be there for familial support along with my spouse Ben Page."

"It's very different to be here than at many other law schools. Social justice, economic justice and equality are not a fight at Seattle U, which is always forward-thinking with new ways of delivering that education and how to be of good to the surrounding community as well as the global community," says Adamson, now in his 14th year at the university.

When she nominated him for the Pincus Award, Lisa Brodoff wrote, "In addition to his more traditional scholarship, Professor Adamson has been a leading advocacy voice in the academy for the most pressing legal issues of the day."

Brodoff notes that when he directed the program from 2002 to 2006, Adamson oversaw the first big expansion of clinical education at SU, adding clinics in mediation, intellectual property and bankruptcy.

Adamson applied for and received a grant from the Washington state attorney general's office to develop and teach what Brodoff describes as an innovative mortgage foreclosure practicum course where students counsel and represent homeowners.

In addition to the predatory lending clinic that he designed and implemented, Adamson also created a mass media law clinic and the community development and entrepreneurship clinic in collaboration with Albers to address strategy, accounting, product branding, business development and labor issues.

This profile will appear in the forthcoming President's Report.

Peach-colored jacket in plenary sessions
Racial injustice - he'll help us teach lessons!
Fighting for status till liberty rings!
These are a few of our fave Bryan things…

Foreseeing crises to create brand new clinics!
Mentoring students for justice not cynics!
Cutting-edge fashion from Fall until Spring
These are a few of our fave Bryan things…

Marrying Ben in cream matching tuxedo
Cultural competence - he made it our credo!
Becomes Stevie Wonder whenever he sings
These are a few of our fave Bryan things!

Predatory Lending!
Trump Ascending!
Claims that clinics are too costly to have!
We simply remember our fave Bryan things
And then we don't feel…So bad!