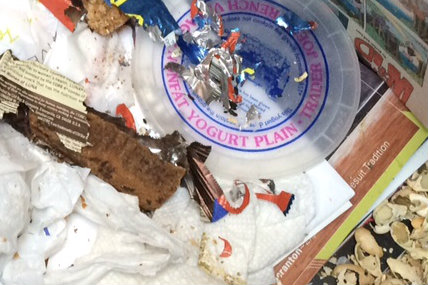 Yep, I should have known better than to assume mice have bad taste.

With a stash in my bottom desk drawer that included a prune dipped in dark chocolate-a delicacy from a local Polish Festival-and a bag of gluten-free, hot buffalo wing pretzel sticks, I thought I was safe.

What mouse makes a gorge fest of spicy-hot snacks or a chocolate-covered antioxidant superfood all the way from Poland?

A smart gourmet mouse, that's who, one with a discerning palate, not unlike Remy the rat who dreams of becoming a chef in the classic Pixar film "Ratatouille."

Our two actual encounters involved the characteristic loud "eeks!" on my part.

The first time, I heard what I thought was my cell phone vibrating in my purse. I opened the drawer and watched the critter scurry. I bolted from the otherwise unoccupied office, glad it was the end of my workday. I vowed to return with surgical gloves.

The next morning, when co-workers asked to see where I found a mouse, I opened the drawer just in time to get a glimpse of gastronome Souris (that's French for mouse, pronounced SOO-ree, not to be confused with sourire: to smile, snicker or grin) climb out of my snack cache, scamper across the top of a bunch of file folders and retreat to an undisclosed destination.

To catch a gourmet mouse

Twice and I knew this mouse was serious. I realized I'd parked too many treats here that weren't tucked into mouse-resistant containers. I pawed through the drawer in my surgical gloves-paper towels in one hand, a bottle of disinfectant in the other.

"I've got your back," a colleague said before he sweetly swept up the crumbs.

I found two chocolate-covered power bars, wrappers decimated, both half eaten. Teeth marks were evident in one that was gnawed from both sides, maybe to get the most chocolate?

The Weight Watchers sweet and salty toffee snack bars? Nada. Souris didn't even bother to chew through the wrappers for a whiff. Souris can read, perhaps? Anyway, this wasn't a mouse on a diet.

There were two high-protein cookies, each larger than four inches in diameter. One was peanut butter, the other lemon poppyseed. Which would you think? Wrong! Gourmet Souris gorged on lemon poppyseed, although 16 grams of protein was a bit much. Half-eaten again. Didn't Mama mouse ever tell Souris to eat what you take and clean the plate?

When I got home, my mate laughed and was amused that I'd been outed by a mouse.

"Everybody is going to know you're a munch mouth now," he added.

I protested and said most of the loot (well, maybe not hot pretzels and exotic prune) was to appease my acupuncturist, who insists I require a wallop of protein before each appointment, typically in late afternoon.

Drawer cleaned, contents thrown away, I packed up what was unscathed in mouse-proof containers and figured the incident was behind me.

A few days later, a co-worker announced that Souris (although she and another co-worker dubbed the mouse Monterey Jack) delved into not only her almonds, but also her tea.

"TEA?!" I shouted in disbelief-horror, actually. She must be joking, right?

I started digging through numerous tea boxes on a top shelf to assess the damages.

Nope, no mouse droppings to be found in the giant open sack of hundreds of London Cuppa tea bags, likely because a mouse can smell, just like the rest of us, and these obviously didn't meet its olfactory expectations. No challenge, either.

No signs of an intruder on double bergamot earl grey or salted caramel tea bags. A mouse that can read not interested in salted caramel? I couldn't fathom it.

I should have known this choosy mouse would prefer to nibble at a couple of organic  earl grey tea bags. And it must've been the heady scent of spiced chai that prompted a few chomps into those, too.

While I scored that prune at a once-a-year festival and the hot pretzels demand a trek not exactly in my everyday sightline, I was relieved to find the Tazo Focus tea untouched. Tazo awhile back declared its Focus no longer available, despite protests from tea lovers, me included.

I wasn't surprised Souris ignored the Focus, though. What self-respecting mouse seeks focus? Other than in the hunt for culinary delights, that is.

Souris is quite the lucky mouse. One rainy day recently, my champion coworker Emily Payne spotted movement inside her umbrella on the floor. She had the smarts and semblance of mind to grab the umbrella, cover it with her recycling basket, run for the front door of our office and let Souris (or Monterey Jack, depending on your proclivities) loose on the wilds of Capitol Hill. Just think of all the fine-dining restaurants with alley compost bins just waiting for the arrival of this gourmet mouse.

"A lesser mouse might not have seen my generosity," said Payne. "It was a good thing he had good taste."