As he stood in the sprawling Vatican City piazza of St. Peter's with thousands who made the pilgrimage to watch Pope Benedict XVI canonize seven saints, Patrick Twohy, S.J., thought to himself, "This is so right, the Church honoring those who lived the beatitudes."

Father Twohy, whose calling to serve Native American people began nearly 40 years ago, couldn't imagine he'd have an opportunity to make the trek to Rome in late October to celebrate the canonization of Kateri Tekakwitha, the very first Native American saint and a member of the Mohawk Tribe. It was the Seattle University Jesuit community that stepped in and wanted to sponsor his trip.

Twohy had never been to the Vatican. Excited as he was before he left, he found himself wrestling with the dichotomy of the setting's grandeur and Kateri's humility.

"I was having a hard time putting together the greatness of Rome and the humbleness of this woman, the difficulties she faced so courageously and how it fit together," he said.

For a little insight, he met with Seattle Archbishop J. Peter Sartain. "He told me this was the way it should be because these are all the most beloved," Twohy said.

He signed on to travel with a group of about 40 Native people from several Northwest tribes. Two or three other large Native groups, many of them Mohawks from upstate New York and Canada, made their way to Rome as well.

"We were there with many tribes. They all claim her because the honor of one is the honor of all. That certainly was the case on that wonderful day," Twohy said. 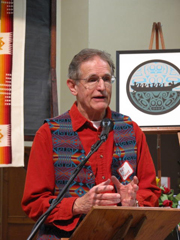 As a member of the Tekakwitha Conference-the only annual gathering of Catholic Native peoples in North America, Twohy had prayed with 800 to 1,200 others for the canonization of Kateri each year since Pope John Paul II beatified her in 1980.

Born in 1656 in upstate New York, Kateri was first recommended for sainthood more than a century ago. It wasn't until six years ago, though, that her role in the healing of a gravely ill boy from the Lummi Reservation near Ferndale, Wash., Whatcom County, was deemed a miracle. After 6-year-old Jake Finkbonner received last rites and lay on his deathbed from a flesh-destroying bacterial infection, prayers to Kateri began and a relic of hers was placed on his body. The boy's healing played a role in Kateri's canonization. Jake Finkbonner, now 12, and his family also attended and were celebrated at Kateri's canonization.

Twohy said that for him Kateri represented the efforts of Native women to keep their people together.

"To have her honored is to honor all Native peoples, the sanctity of their lives and the beauty of their culture. I was blessed to be standing in St. Peter's piazza with all these grandmothers and great grandmothers whose guidance I so value," said Twohy. Today he leads 12 Jesuits who serve Native Americans throughout the Northwest with the Rocky Mountain Mission Ministry.

The Jesuits have a 170-year history with Native peoples, according to Twohy, who in 1973 moved to the Colville Reservation at Nespelem, Wash., in Okanogan County.

"That was the beginning and it has gotten deeper and more profound with each year for me," said Twohy, who later lived on the Swinomish Reservation in Skagit County for 21 years. "Now I see the world with a double richness. I belong to the Catholic tradition and that world view and to those people whose wisdom spans thousands and thousands of years. I want to journey forever with them into the next world."

Twohy joined the priesthood at 18.

"Ever since I was young, I've always been drawn to the mystery, that which is hidden in all things," he said. "When I met the Jesuits who taught me in high school, I was deeply impressed with the width of their learning, the width of their hearts and their engagement with the world."