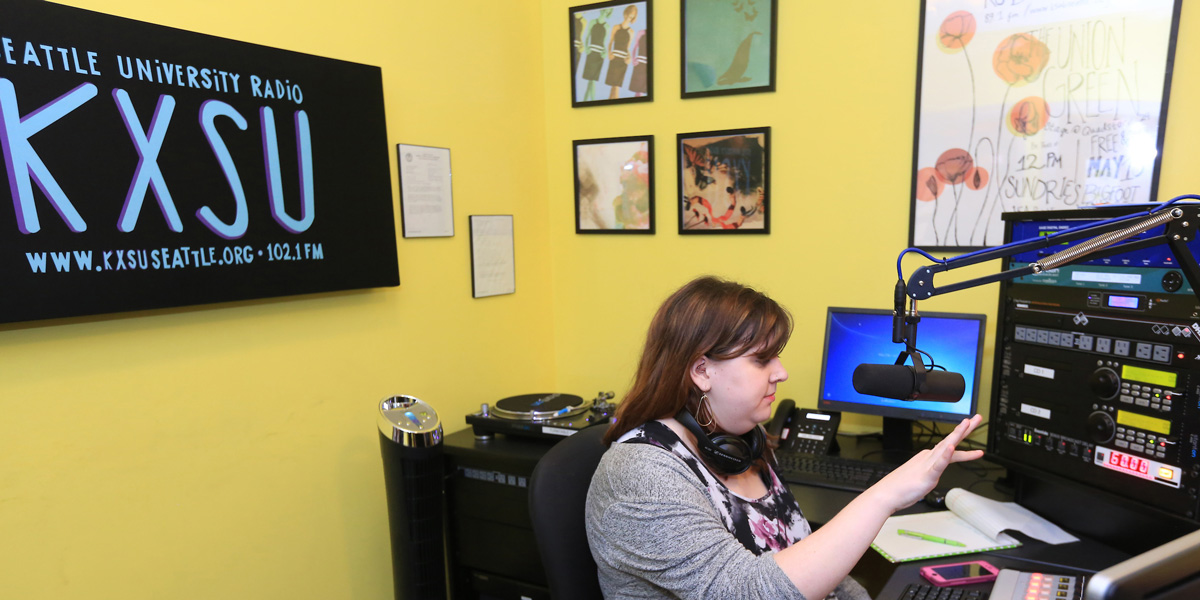 For the first time, SU will broadcast on FM radio

Get ready to fire up that radio, set the dial to 102.1 FM and enjoy. Yes, in honor of its assigned frequency, Seattle University will have a presence on FM radio, as of 10:21 a.m., Friday, Feb. 26. KXSU is the name, and delighting listeners on-and beyond-our campus will be the game.

In 2014, the Federal Communications Commission granted 15 licenses for low-power FM stations in Washington, seven of which are in Seattle. Only one of the 15, Voice of Vashon, is on the air. KXSU will be the first of the Seattle stations to broadcast.

Don't be fooled by the "low-power" descriptor; SU's station will have some range-up to seven miles, says Station Manager Randy Scott. "We're booming in the U-District. When we were testing (the signal), I got out to 65th and Roosevelt, and it still sounded great. Think about it: We're on the highest point in Seattle, on top of a building (Campion). We're throwing a pretty good signal here!"

(And don't fret if you're further afield-you'll still be able to stream the station over the Internet at http://www.kxsuseattle.org/)

Formerly known by the call letters KSUB, SU's soon-to-be FM station has a rich lineage. KSUB got its start in 1994 when John Foster, S.J., executive assistant to the dean in Matteo Ricci College, recognized the need for student radio. He secured donated equipment from KIRO's News Division. The idea, Father Foster says, "was to provide students experience in radio as a form of journalism, without it being academic." Back then, KSUB was broadcast through the electrical systems of the student residence halls.

Later, with the support of President Stephen Sundborg, S.J., and guidance from John Carter, who followed Father Foster as faculty advisor, KSUB underwent major upgrades and began streaming online in 2003 through the station's website.

Seattle University radio's founding father-make that Father with a capital "F"-is enthusiastic about the move to FM radio. "This gives SU a voice to the city that it never had before," says Father Foster.

SU's station on the ground floor of Campion is run by a small army of student volunteers, Scott being one of them. (When he's not overseeing the station, Scott is hard at work earning a master's degree in community counseling from the College of Education.) In all, approximately 75 students are working at KXSU. Among other responsibilities, they DJ, promote the station, produce PSAs to publicize events by local non-profits and other causes and schedule live bands for in-studio appearances. KXSU will be on air 24x7, but automated when DJs aren't there.

Watch as SU’s new radio tower is installed on top of Campion Tower. KXSU will begin broadcasting on FM 102.1 on Feb. 26.

Carter, professor of mathematics, continues to serve as advisor and has been integrally involved in the transition to FM.

"Broadcasting on the FM dial will allow the station to develop from a 'radio club' into a student-run professional organization with ties across campus and throughout the community.

"(Students) will grow by actively doing many of the things professionals do. (They) will learn how to plan and run meetings, how to develop business plans and budgets, how to manage time and how to lead. DJs and volunteers will gain real-life experience in broadcast, radio, time management, promotion and how to work with others. They will quickly develop professionally through an intensive training program and because they will know that Seattle and the world will be listening. Simply put, (KXSU) will help SU educate the whole person."

Among other benefits, Father Foster sees the station as a new avenue for recruiting, as prospective students hear their contemporaries on the air and imagine becoming similarly involved.

Then there's the professional development side of things: Father Foster knows of at least six or seven former KSUB DJs who have gone on to careers in the broadcast industry.

Scott likewise got his start in college radio and went on to a two-decade professional broadcasting career in the Midwest, Seattle and Boise. And yet he sees the college radio experience as beneficial for all students, whether or not they decide to work in the industry. It's a perspective to which he can attest personally as he nears completion of his community counseling degree.

"I've been reminded daily that the skills I learned as a broadcaster are helping me in the counseling realm. I know that sounds like a big stretch, but it's not. (Broadcasting) is about communicating clearly, it's about listening-listening is a huge skill you learn in radio, especially when you're doing interviews. So all the skills I learned in radio I'm taking into a career that has nothing to do with broadcasting."

Scott dubs the station "hyperlocal" and likens it to a restaurant that serves meals with ingredients sourced from nearby, in contrast to what you would find at a national chain.

As for the format, Joe Manuel, a junior business major and promotions director at the station, describes it as "a lot of indie and local roots, but it can get as diverse as the DJs (who are programming the music)."

Other possible future programming additions include radio theater, sports play-by-play and a weekly show Father Foster is working to develop with a student in Matteo Ricci College that will address campus news and issues.

A public affairs ethos will be ingrained in the DNA of KXSU, says Scott, who notes that the FCC's mission is public service. "It really aligns nicely with SU's mission to serve. It's part of who we are and what we do."

Carter expands on that thought, offering a number of ways in which KXSU will advance SU's mission. "The station will benefit the community that surrounds SU including the Central District, Capitol Hill, First Hill, Rainier Valley and Beacon Hill, (bringing) diversity in programming to the area. The station will address ownership inequalities as it will be run by students instead of a mass-media conglomerate. KXSU will help amplify and expand community programs such as Seattle University's Youth Initiative and Law Clinic. Finally, the station will help increase the university's civic engagement by providing a voice for the university in the community."

Scott notes that most of his students grew up not listening to broadcast music, and that running a radio station has its challenges, lessons and rewards.

"The idea of a radio edit that has to be completely clean is foreign to them," says Scott. "They had to learn FCC regulations on speech and words that can and can't be used.  We've had lots of conversations about this."

You have to learn to stay true to your values, yet work within a system, says Scott. "It's how to keep your voice on the air and keep it clean, and how to work with others."

Once in a lifetime

Manuel, the promotions director, agrees. "This has probably been the coolest experience in my life."