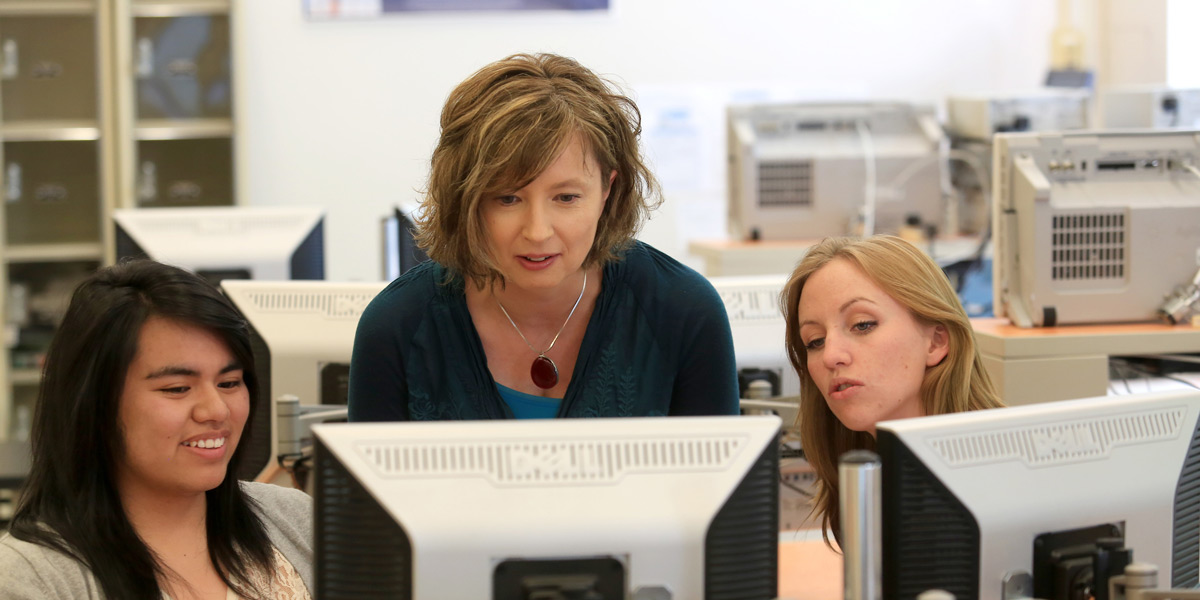 Agnieszka Miguel (center) is working to bring more women and other underrepresented groups into the field of electrical and computer engineering.

The current number of students graduating with bachelor's degrees in engineering, software engineering and architecture is only meeting about half of what the industry needs, according to the Washington Higher Education Coordinating Board. The largest share of this shortfall is attributed to the field of electrical and computer engineering.

"What we do is invisible," Miguel continues. "We have a famous example where you show an iPhone to a high school student and you ask them, 'Who do you think designed it?' And they would say computer scientists. Which is not completely true-(the computer scientists) may have had a part in programming it and developing the software but the hardware of an iPhone is all electrical and computer engineering."

And yet getting a student interested in electrical and computer engineering is sometimes just half the battle. It's as important to have financial aid for qualified students otherwise unable to enroll.

Thanks to a $612,000 grant from the National Science Foundation (NSF), seven additional transfer students enrolled in SU's Department of Electrical and Computer Engineering this year. The largest NSF grant in the college's history, the funding will provide up to $10,000 a year to at least 28 recipients over the next five years.

Miguel and her colleague, Associate Professor Margarita Takach, are co-principal investigators on the grant. They decided to focus on transfer students, who had begun their studies elsewhere but needed financial help to continue. This allowed the scholarship to impact more students.

It's not just about the money, though. The grant also provides a full suite of support such as tutoring, study partners, advising, mentoring, networking and internship opportunities. Some of these services were already in place at SU before the grant was written-in fact, Miguel believes this was a key selling point for the NSF-while other support is new and customized to the NSF program, officially known as S-STEM.

One of this year's seven recipients is Mark Berg, a non-traditional student, who says it was his work in the fishing industry after high school that got him thinking about electrical and computer engineering. "Being exposed to different industrial food processing machinery that comprised of many different electrical applications, including sophisticated portioning and weighing machines, x-ray and ultrasonic detection systems and even welding, really 'sparked' my interest in science and engineering principles involved in design work." He says it also didn't hurt that many of the engineers with whom he came in contact rarely had to work on weekends!

Berg is grateful for the opportunity to enroll at SU. "The NSF scholarship really means a lot to me. Not only does it offer financial relief and a multitude of support services tailored for electrical engineering students, but it mentally offers great encouragement by Seattle University and its outstanding ECE faculty. I definitely feel the message of, ' We  believe in you and your goals, you can achieve anything!"

He also appreciates the networking and internship opportunities he is receiving through the program and is interested in getting into power engineering, particularly technology related to sustainable, renewable energy.

Miguel and Takach are looking to use the scholarship as a recruitment tool for other excellent students like Berg. They are particularly interested in bringing more women and other underrepresented students into the program.

Miguel herself would seem a walking billboard for that cause, having bucked the odds to not only enter but lead in a field that is starving for professionals, regardless of gender but particularly women.

Remarkably, she is not alone in SU's College of Science and Engineering. Jean Jacoby and Mara Rempe serve as the college's two associate deans, and the other two engineering departments are also chaired by women-Katie Kuder of Civil and Environmental Engineering and Teodora Shuman of Mechanical Engineering.

"The culture of the college is very supportive (of women faculty)," Miguel says. "I think the balance between personal and professional life is important to people and supported. And I have had some good mentors."

She points to some positive signs in the ongoing effort to enroll more women. In her own department, the percentage of women students increased from nine percent last year to 15 percent this year.

Still, there's much work to be done. Miguel returns to the need to capture the imaginations of prospective ECE students. "As a field, we need to do more advertising, more marketing. Engineers are not necessarily good at that, but we have to figure out how to market it to high school students, and even earlier (in K-12)."

In this regard, the NSF grant is likely to help bring more visibility to a field that has largely been under the radar.