"The Negro Passion Play," a dramatic depiction of the Passion of Jesus Christ within the context of the American Civil Rights Movement, will be presented on campus next month. Brainchild of Tyrone Brown, administrative coordinator for Counseling and Psychological Services (CAPS), and founder and director of Brownbox Theatre, the play has been significantly influenced and supported by-and even features-members of the SU community.

Brown says he had long been intrigued by the passion play as a genre, calling it "one of the more populist, if not most popular, forms of theatre in the world." More specifically, he was interested in exploring the following: What would have happened if Christ and been a born a black man in the American South during the late '50s and early '60s; what would the American crucifixion be; and what role did religion play in the oppression of African Americans? 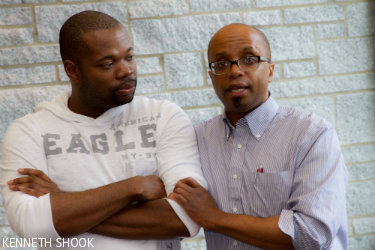 It was through the connections made possible by Brown's "day job" at SU that he was able to evolve these questions into a theater performance.

He says the opportunity to apply for support from SU's Endowed Mission Fund moved the project a step closer to reality. Another pivotal moment came during the President's Welcome in September when he discussed his vision for the play with a colleague. At this point Brown was still deciding how to handle the writing of the play-should he use an existing script or commission a playwright? One of his colleagues presented a third way, a process called "devising" in which an ensemble collaborates over time to build the narrative, and suggested Brown get in touch with Harmony Arnold, associate professor of theatre.

He did, and Arnold and a colleague at Western Washington University led Brown and others through a one-day workshop on the devising process. In time, Brown and the cast went through a three-stage process of pre-rehearsal, invited showings, and rehearsal in the development of the script.

"I think that people are going to be pleasantly surprised by what we have be able to theatrically create in very little time," says Brown, adding that the cast condensed what ordinarily would be a year-long devising process into eight weeks.

Without playing spoiler, here's a glimpse:

"It is a Sunday morning, nineteen-hundred-and-fifty-five, in a small American town. Mary Magdalene and Martha enter a church in the midst of Jubilee service and sit in a back pew. They are teenagers and Black and this is an all-white congregation. His sermon interrupted, the Reverend Caiaphus, demands that the heathens leave the sanctuary, but Mary and Martha respectfully decline. Soon Herod's men are called and the girls are arrested. Meanwhile, Jesus of Nazareth Baptist Church and his twelve Disciples 'hear tell' of the arrest and move to intercede on the girl's behalf. Jesus soon find himself thrust into the burgeoning movement to integrate 'The Church' and headlong into the fulfillment of prophesy."

The cast, which is mostly made up of community members, includes an SU staff member Heidi Beck, instructor in the Culture and Language Bridge program as Mrs. Caiaphus and former SU staff member Kenneth Shook as Pontius Pilate.

As part of the creative process, Brown asked the cast what they'd like for the audience to take away from the play. Some hope the play will serve as a reminder that there is more work to be done to achieve the sort of justice that people such as Martin Luther King, Jr. envisioned. Others see the performance to underscore the essence of Jesus' teachings, particularly his insistence that the most important commandment of all is to love your neighbor as yourself.

"The Negro Passion Play" is the latest in a long string of directing credits for Brown, which include many notable theater works in Seattle and at the Edinburgh Festival Fringe. He founded Brownbox Theatre in 2001.

This is Brown's second stint at SU. He started at the university in 2007, working in the President's Office and then Student Development. After earning his MFA in Arts Leadership in 2010 he participated in a directing fellowship with the Drama League in New York. Returning to the university in 2011, he worked in Center for Justice in Society before taking on his current role. He says working in CAPS affords him a different perspective on SU's mission to care for the whole person. "I also appreciate working in an environment that provides space for my artistic endeavors and allows me to grow personally, professionally and artistically."

Brown is particularly grateful to the Endowed Mission Fund, which he says, "gave me to the impetus to move forward with 'The Negro Passion Play' and provided much-needed financial and institutional support." He is grateful for the other university partners that, in one way or another, have been supportive of the endeavor, including the Office of Multicultural Affairs, the Division of Student Development, Conference and Events Services, the Office of Information Technology and CAPS.

"I am amazed by the dedication of those who have been with me from the start," says Brown. "This has in many ways been an 'act of faith' on their part to see the process and the production through. I find myself getting emotional sometimes after rehearsal, because I can't believe that my 'bucket list' project is coming to fruition."