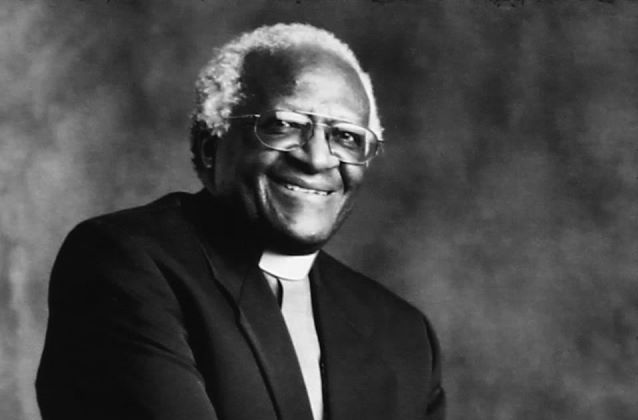 Archbishop Desmond Tutu, who passed away Dec. 26, 2021, was celebrated for his tireless work as an anti-apartheid and social justice activist. In 2000, President Emeritus Stephen Sundborg, S.J., conferred an honorary doctorate to Bishop Tutu.

“I am not interested in picking up crumbs of compassion thrown from the table of someone who considers himself my master. I want the full menu of rights.”
—Desmond Tutu

Desmond Tutu, the South African bishop and theologian, is revered for his longstanding work as an anti-apartheid activist and as a tireless champion for human rights and social justice. Ordained in 1961, Tutu retired as archbishop of Cape Town, South Africa, in 1996. In 1984, he was honored with the Nobel Peace Prize “for his role as a unifying leader figure in the non-violent campaign to resolve the problem of apartheid in South Africa,” according to the Nobel Prize organization. In 2000, President Emeritus Stephen Sundborg, S.J., conferred an honorary doctorate to Bishop Tutu. Archbishop Tutu passed away Dec. 26, 2021. He was 90.

During his visit to the university in 2000, Tutu mesmerized and inspired an audience of campus and community members who were enthralled by his words as if they were witnessing an august sermon.

Here’s an excerpt, from the Spring 2000 edition of Seattle University Magazine, of Tutu’s visit and impactful message:

“Archbishop Desmond Tutu captivated his audience at Seattle University…bathing them in the warmth of his beatific smile and uplifting them with repeated assurances that God believes in us all, despite our boundless capacity for evil. ‘God has a dream,’ the retired Anglican archbishop told the crowd near the end of his address. ‘A dream that we will come to realize that we are members of one family… In this family, there are no outsiders. All are insiders. There are no aliens. All belong. …Even those we call extremists. They are God’s children, too.’”