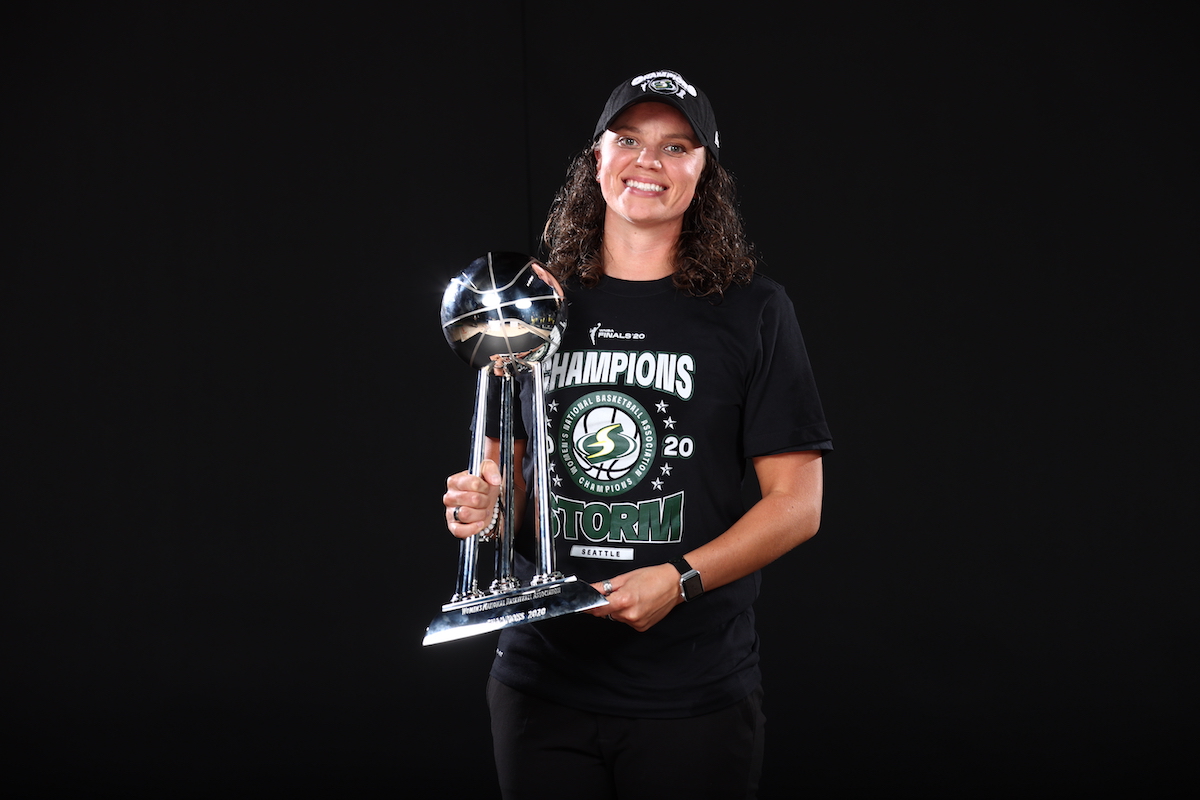 Basketball is in Talisa Rhea’s DNA. Here’s a snapshot: A standout college player for Oregon State University and Seattle University, a stint playing professionally overseas and now the general manager of one of the top WNBA teams in the country.

That WNBA team happens to be four-time champions Seattle Storm, an organization that Rhea, ’12, began working for as an intern while earning her master’s in sport management from the University of Illinois.

“That internship then led to a full-time role as the manager of basketball operations,” she says. “Each season I’ve been able to gain more experience and have been really lucky to work for people who have empowered me and given me the opportunity to grow.”

Her recent promotion to general manager came just two days before the 2021 WNBA draft, nevertheless she jumped right into leading the team. “I worked with our coaching staff, former general manager and our current CEO/team president to make sure we were prepared going into [the draft] and ready to execute our plan to add valuable pieces to our roster.”

As GM, Rhea’s role involves evaluating talent, college scouting and WNBA free agency, building a competitive roster and serving as a positive representative of the Storm organization—along with managing and supporting coaches, support staff and overall operations of the team and season.

“I get to work with some of the best athletes in the world and am … fortunate to be part of an incredible organization that performs at a championship-level, on and off the court” says Rhea. “The people I work with are definitely the highlight of my job.”

Rhea always knew she wanted to work in sports, “but wasn’t sure if that would be in coaching or the business side,” she says. “…My current role allows me to continue being involved with the sport I love, while being a part of an incredible organization.”

After gaining insights into the general manager role and the business aspect of professional sports, Rhea says she quickly realized that was the right path for her. “I want to continue working in a role where my passion for basketball and working for an organization that values on- and off-court success could align.”

When Rhea decided to transfer to Seattle U as a senior majoring in sport and exercise science, she was seeking a new opportunity to continue her basketball career. “Seattle U’s holistic approach challenged me to think about how I was developing as a person—a basketball player and a student. I knew that graduating from Seattle U would position me very well to join an organization and have the skill set to be collaborative, have confidence in what I bring to the table and to always remember the greater good and big picture.”

During her Seattle U playing days, Rhea was integral to the team’s success. As team captain, Rhea steered the Redhawks to the semifinals of the 2012 Women’s Basketball Invitational (WBI) and was named College Sports Madness Independent Player of the Week three times. She was the second-leading scorer, led Seattle U in assists and was recognized as 26th in the nation for her assist average.

After graduating from Seattle U, she signed with an agent and played professionally in Poland for Centrum Wzgórze Gdynia. Experiencing an entirely different culture, language and team “pushed me out of my comfort zone and challenged me to take more initiative, become more independent and take advantage of the opportunity to play professional basketball,” she says.

Rhea’s firsthand experience as a professional player offers her additional insights when it comes to understanding her players. She knows that it starts with building individual relationships and “getting to know them as people first.” Once that’s established, along with the “understanding that we are all working toward a shared goal, we are able to put players in position to be successful and the best they can be.”

For students interested in pursuing roles within professional sports, Rhea advises to continue learning about various roles within a sport organization’s team and business by pursuing “internships, networking opportunities and allow yourself to work into what you may think is your ‘dream role.’ It may not happen right away, but if you continue to take advantage of opportunities in front of you, your path will lead you exactly where you should be.”

Outside of her career, Rhea enjoys spending time with friends and family, staying active, keeping up with her favorite television shows and watching other professional sports.