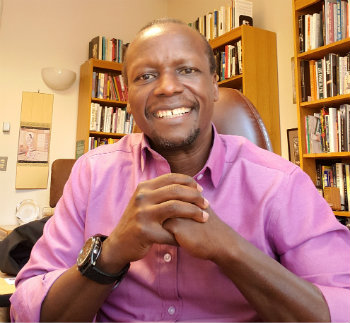 Kizito Kiyimba, S.J., who is visiting SU as the 2019-2020 LeRoux Chair, will give a lecture on ethical dimensions around artificial intelligence systems (AIS) at 4 p.m., Tuesday, Oct. 29, in Bannan Auditorium (room 102).

Originally from Uganda, Father Kiyimba serves as vice chancellor of Arrupe Jesuit University (AJU), which is located in Zimbabwe’s capital city of Harare. Begun in 1994 as a college dedicated to helping form Jesuits, the institution was inaugurated as a university in February 2018—becoming the second Jesuit university in all of Africa—and graduated its first class this past May.

Among other degrees, Father Kiyimba holds a Ph.D. from London School of Economics and Political Science. His teaching and research center on the philosophy of science, and his scholarly activities include serving as a researcher on “God’s Order, Man’s Order and the Order of Nature," a project sponsored by the Templeton Foundation.

“I am in love with SU as the ideal we want to follow at AJU,” he says. “Here we have a warm and welcoming Jesuit community at the heart of a relatively small but significant university, seeking to make a transformative impact on each member of the SU family. Here, it is easy to interact thoroughly and communicate truthfully and in love.  I have made so many friends, and we look forward to a strong friendship between our sister institutions.”

Human intelligence ought to play a normative role, not only a descriptive one, in the designation of artificial systems (AIS) as intelligent. And yet human intelligence as rationality has often gone astray and excused or even facilitated events and choices that are otherwise unjustifiable (e.g., holocausts, eugenic efforts). What then is left as a sure reference for intelligence in humans, which we can then impart to AIS?

The William F. LeRoux, S.J. Endowed Chair in Arts and Sciences is awarded to a Jesuit academic in the arts, humanities or social sciences. The chair teaches one course, conducts a public lecture, advances his scholarship and engages with the Seattle University community.

William F. LeRoux, S.J., came to Seattle University in 1958 as a professor in theology. A much beloved ambassador to alumni and friends, he served as dean of the College of Arts and Sciences (1977-82) and assistant to the Vice President for University Advancement from 1982 until his death in 2004.