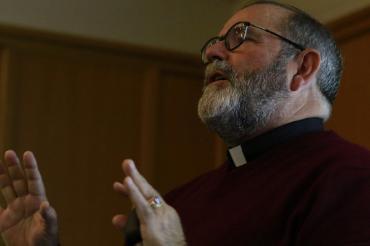 As part of the university’s yearlong celebration of its 125th anniversary, Tom Lucas, S.J., university professor of Art and Art History and rector of the Arrupe Jesuit Community presented a fast-moving and visually engaging trek through the university’s history on Oct. 25.

Once referred to as “The PowerPoint Ninja,” Father Lucas did not disappoint the crowd that packed into to Wyckoff Auditorium. Covering 125 years in 45 minutes—which, he joked, “comes out to about two and a half years a minute—Lucas called the stroll through SU’s history a “complicated journey.”

Picking up with the Jesuits’ first arrival in the Pacific Northwest, Father Lucas continued with the founding of the school that would come to be called Seattle University. He chronicled the institution’s ensuing ups and downs and brushes with death, highlighting the faculty, staff, benefactors and friends whose grit and determination secured SU’s place as a premier Jesuit institution in Seattle. “This is a scrappy place,” Father Lucas remarked.

He ended his presentation by outlining a few challenges facing the Seattle University of today, one of which he said, was “staying true to our rich tradition of Jesuit humanism while at the same time embracing the…changing world that we live in.”