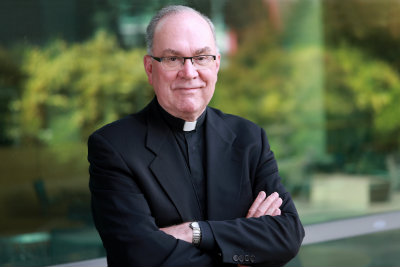 Stephen Sundborg, S.J., received the Engaged Presidential Leadership Award from Campus Compact’s Western Region on March 8. The award was presented during the region’s annual conference, which was held in San Diego.

Described as “the only national higher education association dedicated solely to campus-based civic engagement,” Campus Compact is a national coalition of 1,000-plus colleges and universities “committed to the public purposes of higher education and building democracy through civic education and community development.” The organization is comprised of state and regional offices including the Western Region.

Now in his 22nd year as president, Father Sundborg has made community engagement a priority for the university. Under his leadership, SU has expanded service-learning opportunities for students and strengthened its partnership with the university’s neighbors through the Center for Community Engagement and the Seattle University Youth Initiative, which earned the Presidential Award for community service from the White House in 2012.

SU was also represented at the Western Region’s conference by Kent Koth, executive director of the Center for Community Engagement, and Erica Yamamura, associate professor and director of the Student Development Administration program. Koth and Yamamura spoke on a panel that explored “A Focus on Place: A New Paradigm for Community Engagement in Higher Education,” the topic of a recent book they coauthored.