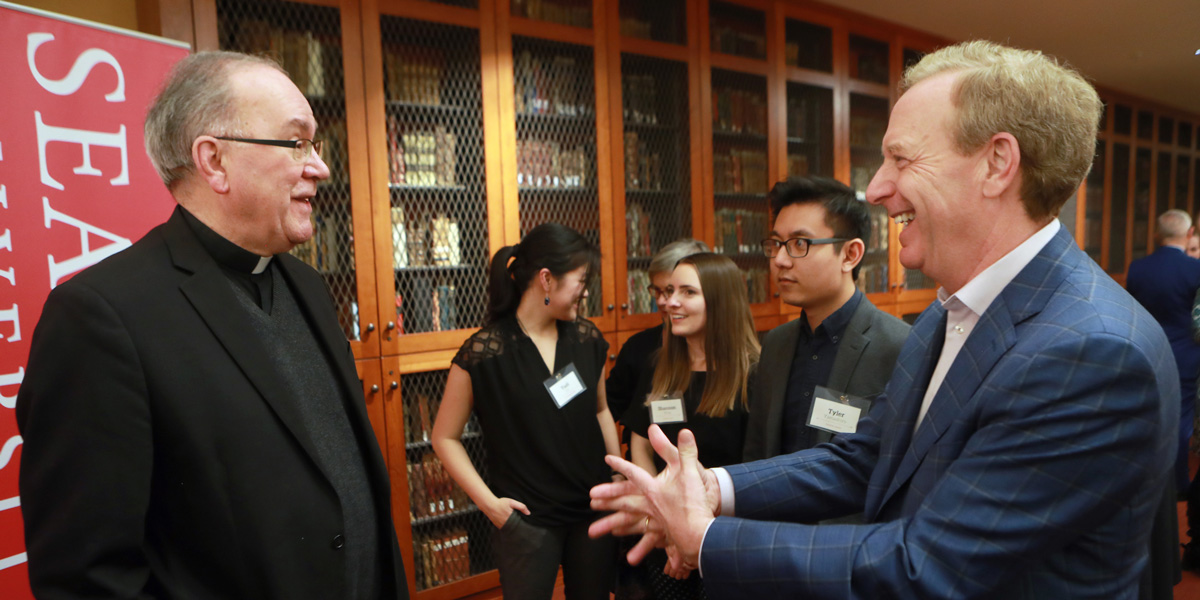 Gift to Support New Center for Science and Innovation, Programming in Ethics and Technology

Earlier this week, Seattle University announced that Microsoft Corporation has made a $3 million gift to Seattle University’s comprehensive capital campaign that is earmarked for the new Center for Science and Innovation and related academic programming dedicated to examining the ethical implications of Artificial Intelligence.

Of the $3 million, $2.5 million will go toward construction of the Center for Science and Innovation (CSI), which represents the future of STEM education at Seattle U. An additional $500,000 will fund development of programming that explores the intersection of ethics and technology as it relates to AI, big data, facial recognition and more.

Development of programs that focus on technology grounded in ethics would leverage the strengths of the two institutions. Microsoft, whose core values include trust and integrity, is recognized as one of the most ethical companies in the world. Seattle U’s Jesuit education places a special emphasis on empowering students to consider the moral choices of the day and to be leaders for the greater good.

“Seattle University is grateful for Microsoft’s generous gift. This gift will help us reimagine STEM education in a way that touches every student at the university and prepares them to meet future workforce and societal needs in the region and globally,” said President Stephen V. Sundborg, SJ “Receiving such support from the region’s largest technology employer and a leading corporate philanthropist affirms the high quality and future potential of the university’s computer science and engineering programs.”

During the Jan. 9 reception to celebrate the gift, Sundborg added, “This is the boldest project that we’ve ever done.  It represents the way our education is moving, which is to complement the humanities with our science programs. Microsoft’s gift also represents a meaningful partnership because this is an opportunity for the university and Microsoft to be linked in an important way.”

“A STEM education coupled with a liberal arts background will be a powerful combination in the future,” said Microsoft President Brad Smith. “Microsoft is a longtime supporter of Seattle University and its approach to educating the heart and mind. The future of technology will require developers to approach their work in a responsible way and the Jesuits are known for challenging students to think responsibly for themselves and their community.”

Just prior to the gift celebration, Smith met with several computer science students and two faculty members from the College of Science and Engineering in a roundtable discussion.  Addressing the students and others at the event, Smith said the students “represent the kind of future the world needs.”

Said Smith, “Because you are getting the kind of education here, that will continue in this new building, to enable you all to not only learn what is needed when it comes to computer science or data science or biology or other STEM fields, but to do something that, frankly, we’re not going to see at every other university in the country or around the world. That’s to combine that technical education with the values that I think a Jesuit education brings.”

Mike Quinn, dean of the College of Science and Engineering, said the gift and inclusion of funds for ethics programming will represent “a step increase in the quality of the education we provide.”

“We pride ourselves in producing STEM graduates who have first-class technical skills but also a commitment to the common good. As Brad Smith says, ‘SU is all about technology grounded in values.’ We are very excited to be working with Microsoft and we’re looking forward to how we can help in the development and deployment of AI and other transformative technologies and doing it in an ethical way. That is going to make a big difference to the region and the world.”

Construction of the CSI is scheduled to begin this spring. It will open in two phases—a new building in 2021 and two renovated buildings in 2023—and will house all of the College of Science and Engineering academic programs and create capacity to accommodate existing and future growth. Overall enrollment in the College of Science and Engineering has jumped 61 percent in the past decade, while the number of students studying computer science has quadrupled.

A café planned for the first floor of the new building will be named for Microsoft.

The Microsoft gift marks a new chapter in its relationship with the university. The company has long sponsored senior-year computer science capstone projects going back to 2000 and currently includes more than 600 Seattle U alumni in its workforce.