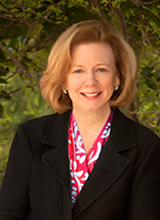 Kristen Swanson, dean of the College of Nursing, has been named chair of the Swedish Board of Trustees.

“I am delighted that Dr. Swanson has agreed to lead our board in this role,” said Swedish CEO Guy Hudson in a news release. “As a longstanding trustee she has made tremendous impacts through her leadership, vision and counsel.”

Swedish is the largest nonprofit health care provider in the greater Seattle area with five hospital campuses, two ambulatory care centers and a network of more than 100 primary care and specialty clinics throughout the greater Puget Sound area.

A noted scholar, Swanson is well known for her research on pregnancy loss and the Swanson Theory of Caring, which is used internationally as a guide for research, education and practice. Well regarded nationally, Swanson was elected to the board of the American Association of Colleges of Nursing (AACN) last year. She has served on the board of Swedish since 2015.