Written by Seattle U Athletics 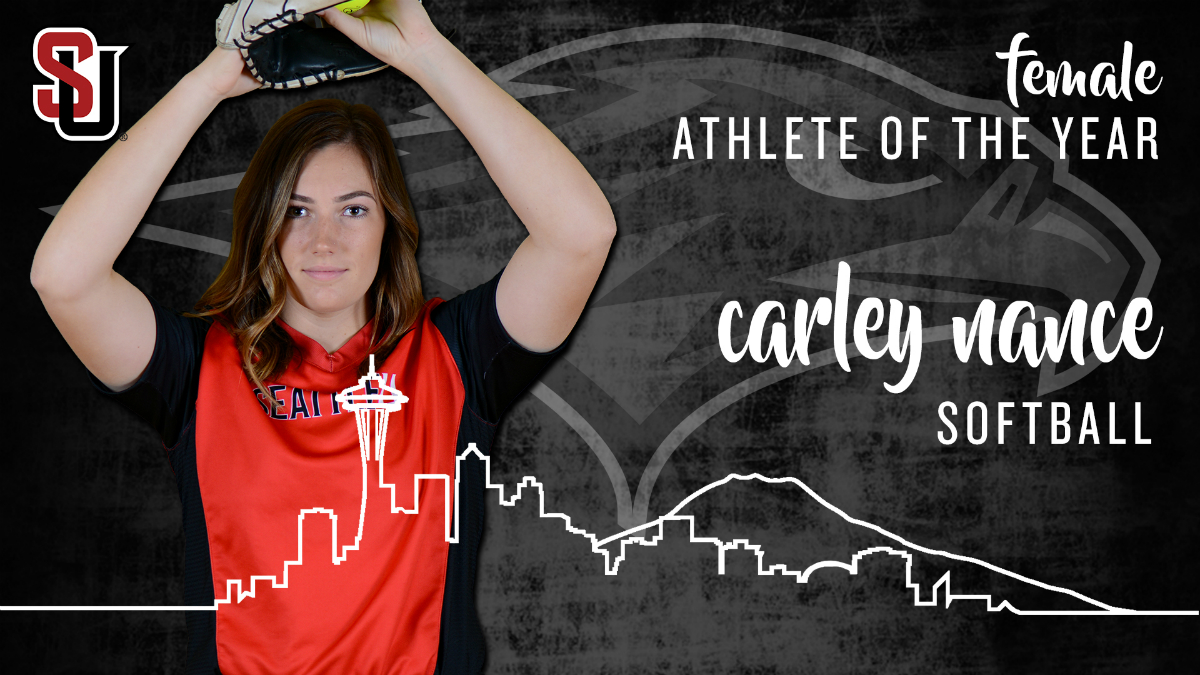 Seattle University hosted its annual Athletics Awards Show, presented by Alaska Airlines, on Friday night at the Pigott Auditorium. SU celebrated its year in athletics, honored its senior class, and handed out awards to Redhawks who excelled in competition, the classroom, and the community in 2018-19.

Isabelle Butterfield of women’s soccer earned the Eddie O’Brien Female Student-Athlete of the Year. She was chosen United Soccer Coaches All-Region Second Team, All-Western Athletic Conference Second Team, and WAC All-Tournament Team as she helped lead Seattle U’s WAC Tournament-title winning campaign. The team co-captain excelled in her role as central midfielder, controlling the action as the Redhawks made their third NCAA Tournament appearance in Butterfield’s career. The native of Bellevue, Wash., graduated in the fall with a degree in mathematics and computer science will graduate with a Master’s this month.

Eli Boudouris of men’s cross country and track and field claimed his second straight Eddie O’Brien Male Student-Athlete of the Year honor. He was an All-WAC First Team choice in cross country and an All-WAC Second Team honoree in indoor track and field. The senior was a member of the distance medley relay that claimed bronze at the WAC Indoor Track and Field Championships. The native of Portland, Oregon, also finished seventh at the 2018 WAC Cross Country Championships. He has a 3.70 cumulative GPA and will graduate with a degree in nursing this month.

Softball’s Carley Nance won the Female Athlete of the Year Award. Nance was a dual threat for the Redhawks, leading the Western Athletic Conference in earned run average while hitting seven home runs and seven doubles. The Maple Valley, Wash., native was vital in SU’s run to their first-ever WAC regular-season title and then starred at the WAC Tournament, claiming two walk-off hits, including a game-winning grand slam, before throwing a complete-game three-hitter to win the final as the pitcher. Nance was named NFCA All-Region Second Team, All-WAC First Team, and WAC Tournament MVP.

Sergio Rivas of men’s soccer took home the Male Athlete of the Year trophy. He concluded his standout career with a stellar senior year, leading the Redhawks with seven goals and 11 assists. A native of Albuquerque, New Mexico, Rivas earned United Soccer Coaches All-Region First Team, All-WAC First Team, and WAC All-Tournament Team honors. He finished his career tied for the most assists in WAC history with 27.

Olivia Viggiano of softball was the Female Freshman of the Year recipient. She was named All-Western Athletic Conference Second Team after a terrific freshman season. The native of Mission Viejo, Calif., started all 57 games in center field this year, helping Seattle U win its first-ever WAC title. Viggiano set a school record with 47 runs in 2019, tied for most in the WAC.

Men’s soccer Declan McGlynn grabbed Male Freshman of the Year recognition. He was chosen Western Athletic Conference Freshman of the Year and All-WAC Second Team following a stellar debut season at Seattle U. The Kirkland, Wash., native started 14 games at forward, scoring six goals to go with five assists. McGlynn scored in the Redhawks’ 2-0 win at the University of Washington.

Softball was the winner in the Competition of the Year category.  In the second round of the 2019 Western Athletic Conference Tournament, SU beat New Mexico State, 8-7, on a Nance walk-off grand slam in the seventh inning. The win marked Seattle U’s second straight rally from a 4-0 deficit to walk off with a victory. The Redhawks won their first-ever WAC Tournament championship the next day.

Women’s soccer Associate Head Coach Rich Schreiner was the Mission Award, Individual, winner for his work with Special Olympics, while softball won the Mission Award, Team, for its efforts to support SU athletics and its team motto of RBLO (Rise By Lifting Others).

In the Service to Athletics category, Hilary Flanagan and the Office of Career Engagement and women’s cross country/track and field student-athlete Jamie Hegg were honored.