To Honor a Legend 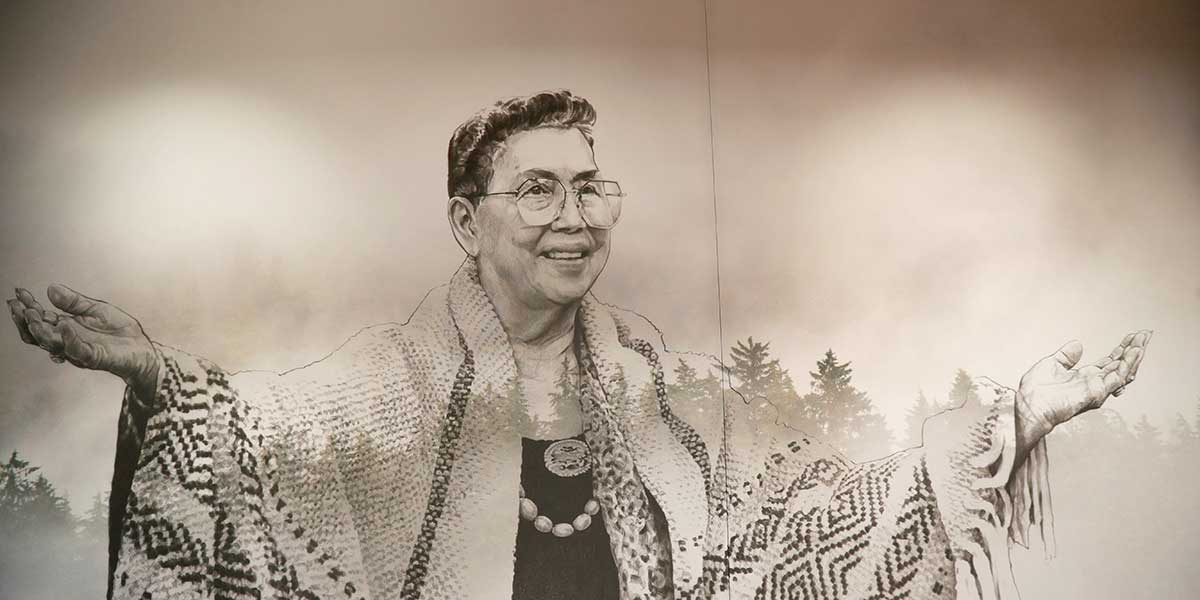 Vi Hilbert Hall is officially opened as latest example of SU's deep respect for its namesake.

A ribbon cutting ceremony was held on Nov. 16 to officially mark the opening of SU’s newest residence, Vi Hilbert Hall. Located on Madison St. between 11th and 12th Avenues, Hilbert Hall provides 300 beds for SU’s students and houses the Division of Enrollment Services.

Vi Hilbert (1918-2008), whose Lushootseed name is taqwseblu, is acknowledged as one of the most important people for the preservation of the Lushootseed language, also known as Puget Sound Salish. 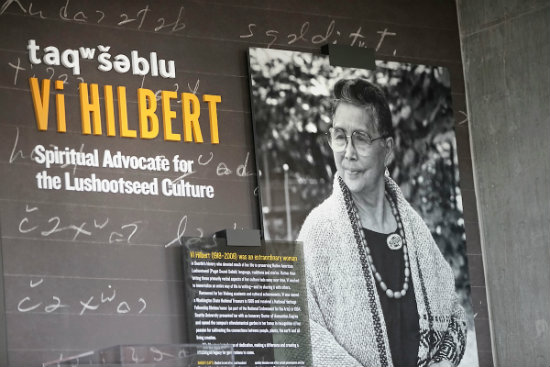 Hilbert Hall is the latest manifestation of Seattle University’s respect and affection for its namesake. The university’s Ethnobotanical Garden is named in her honor and her portrait is included in the murals of significant Pacific Northwest Native peoples in the Student Center. In 1994, the university conferred the degree Doctor of Humanities, Honoris Causa, on Hilbert in recognition of her accomplishments as a language teacher, storyteller, translator, researcher and traditional elder.

Over the years Hilbert has received numerous awards recognizing her lifelong cultural contributions, including being named a Washington State Living Treasure in 1989 and receiving a National Endowment for the Arts National Heritage Fellowship from President Bill Clinton.

Announcing in 2017 that SU’s residence hall would be named for Hilbert, President Stephen Sundborg, S.J., wrote: “The construction of major new buildings on campus is relatively rare. Most are named for accomplished Jesuits who had significant influence in shaping who we are today. We can now be rightfully proud that our newest building will bear the name of an accomplished woman and Native American who similarly embodied our highest ideals and aspirations for a just and humane world.”

The opening ceremony last month was attended by Hilbert’s relatives, as well as Native American leaders and members of the campus community. President Sundborg called it one of the most moving experiences of his 20-plus years as president.

Coinciding with the opening of Hilbert Hall was the Indigenous Peoples Institute’s move right next door to Xavier Hall (160). This included relocating the bust of Chief Seattle from Broadway Ave. to a space outside Hilbert Hall and the institute’s new home.

The Indigenous Peoples Institute (IPI) supports Native student success at Seattle University and raises awareness about issues of importance to local and global Indigenous peoples. Through on-campus events and activities that include the broader community, IPI seeks accountability to Coast Salish and Urban Native peoples and the lands we now share.