Written by Seattle U Project on Family Homelessness 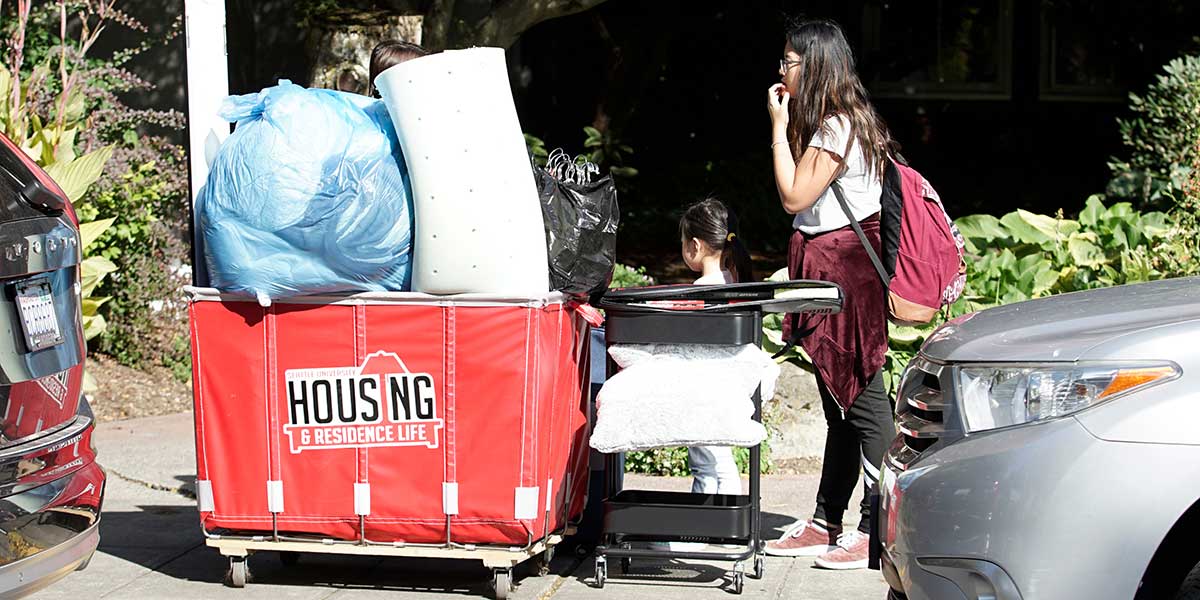 The presidents of four Seattle-area universities and colleges, including Seattle U, have joined forces to declare May 14-18, 2018 as Affordable Housing Week on their campuses.

The presidents of four Seattle-area universities and colleges have joined forces to declare May 14-18, 2018 as Affordable Housing Week on their campuses. Dr. Jeff Wagnitz, interim president of Highline College; Dr. Daniel J. Martin of Seattle Pacific University; Steven V. Sundborg, S.J., president of Seattle University; and Dr. Ana Mari Cauce, president of University of Washington, have signed proclamations or otherwise affirmed the importance of safe, healthy, affordable homes in communities of opportunity. The higher-education institutions join King County and 20 King County cities, including Seattle, in recognizing the benefits of affordable housing to everyone in the community.

Affordable Housing Week, now in its third year, is hosted by the Housing Development Consortium of Seattle-King County. This is the first time all four universities have participated; Seattle University was the first university to sign on, in the inaugural year, with Seattle Pacific University joining last year. The Seattle City Council and Mayor Jenny Durkan have signed this year’s proclamation, and King County is expected to sign at its meeting today.

President Sundborg, of Seattle University, notes that affordable housing is a major issue for universities in a booming region with ever-increasing housing costs. “In an expensive city like Seattle, access to affordable housing is an issue not only for students, but for faculty and staff as well,” he said. “We are pleased to be joined again by Seattle Pacific University, and to welcome Highline College and University of Washington, to this important advocacy effort on behalf of our campus communities.” The private Jesuit university on Capitol Hill this fall will open Vi Hilbert Hall, a new 10-story student residence hall and office building at the northeast corner of campus that will offer housing for 303 students.

University of Washington President Ana Mari Cauce affirmed the commitment of our state’s largest university.  “During Affordable Housing Week, we recommit to ensuring that our community thrives with opportunity, and that all people in it live with dignity in safe, healthy and affordable homes,” Dr. Cauce said.

Nationwide, an estimated 11 to 19 percent of students at four-year colleges are housing insecure. Almost half of all community college students face housing insecurity each year, with 13 to 14 percent experiencing homelessness. The housing shortage affects students county-wide, not only in Seattle, says Highline College Interim President Dr. Jeff Wagnitz.

“The impacts of housing insecurity are, if anything, more pronounced in regions like South King County,” says Dr. Wagnitz.  “For Highline College, it’s imperative that we advocate for affordable housing solutions, both for our students and for our neighbors.”

Universities can serve a unique role in addressing our region’s housing needs.  “Living in Seattle today and hosting Tent City 3 on our campus last winter emphasized the critical state of the challenges facing homelessness and affordable housing,” says Seattle Pacific University President Daniel J. Martin. “We must heighten our commitment so that all in our community can flourish, and we are committed to working with the city, county, and our fellow universities in moving forward on workable solutions through advocacy and service.”

As SPU’s Dr. Martin pointed out, Tent City 3 is one example of how Seattle-area universities have long worked to engage their campus communities in addressing the region’s homelessness state of emergency. All three universities have hosted tent cities on campus.  Seattle University was the first university in the nation to host a tent city on campus in 2005, and Seattle Pacific University has hosted Tent City 3 three times at its campus on the north slope of Queen Anne Hill. The University of Washington hosted Tent City 3 in winter 2016-17. The Chronicle of Higher Education, the leading publication for higher-education institutions, recently published an op-ed by SPU professorsabout how the experience of hosting Tent City 3 changed their campus.

To recognize Affordable Housing Week, Seattle University’s Project on Family Homelessness will host the screening of “Central Division,” a student-produced documentary on gentrification of Seattle’s Central District, Tuesday, May 15, 7-9 p.m. A panel of community leaders and the audience will respond to the issues raised in the documentary. The event is free, and registration is encouraged.

For more information on Housing Development Consortium and Affordable Housing Week, including a full list of community events: www.housingconsortium.org/affordable-housing-week