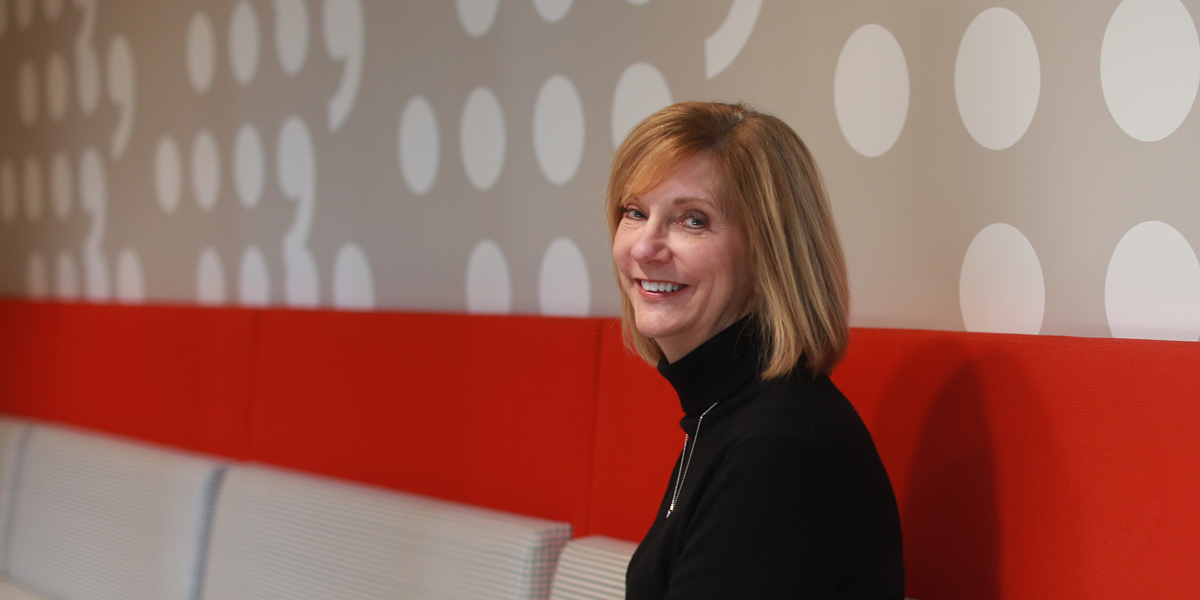 Madlyn Murrey, MN, RN, is well suited to a hospital environment where the buildings conjure storybook settings and the elevators call to mind woodland creatures. “Can you imagine me anywhere else?” she asks, as the “Otter elevator” comes to a stop at the administrative floor of the River Building at Seattle Children’s hospital.

Murrey, ’81, knew early in life that she wanted to be a pediatric nurse. Today, as the Senior Vice President, Chief Clinical Officer, she maintains that she is “still very much steeped in nursing” while overseeing more than 1,000 nurses at one of the best children’s hospitals in the nation.

“You give up a little personally when you move further from clinical, hands-on work,” Murrey says. “But what I am able to give impacts more children on a larger scale. I strive to create an environment where the people who do clinical care delivery can do their best work.”

Caring for children has been at the center of Murrey’s life since her youth growing up on a farm in Fife, Wash.

Taking notice of this nurturing quality was Murrey’s grandmother, who suggested Murrey might make a fine nurse. Inclined to agree, she donned a candy striper uniform at age 16 and found her calling while volunteering for MultiCare Mary Bridge Children’s Hospital in Tacoma.

When she became a mother, Murrey extended her capacious love beyond her own three sons and daughter to make room for “any child that needed a home.” She and her husband, Lonny, whom she met in junior high and married after college, welcomed eight foster children into their lives.

Murrey’s devotion to children led her down a myopic career path. Then mid-way into her nursing career, she had the opportunity to assume a different role, which gave her the chance to consider her career—and herself—in a new light.

In 1994, Mary Bridge entrusted Murrey—then a part-time ER nurse—with developing a state-certified trauma program. Over the next decade, she assumed positions of higher rank while becoming adept in leadership. Eventually, she held executive positions at both Mary Bridge and Randall Children’s Hospital at Legacy Emanuel in Portland, Ore.

Returning to Seattle Children’s as its senior vice president in 2015 was a homecoming for Murrey, who began her career there as a Seattle U undergraduate nursing student and spent her first 12 years in the hospital and clinics. As vice president, she returns to SU’s campus to cheer on Dance Marathon participants, who raise money for the hospital.

While transitioning from bedside care, Murrey had to formulate her leadership style that was true to herself.

“A senior leader told me I led too much with my heart. I tried to change and it didn’t work,” she says. “I learned that I need to be Mady Murrey every day. For me it’s about being sensitive to others, acting with kindness and still being smart and strategic. It’s who I am as a leader.”

“Madlyn Murrey is a champion for empowering nurses and other caregivers to create an environment based in caring … and making health care in our communities more compassionate so children and their families will thrive,” Swanson says.

Walking the halls of the River Building, Murrey offers a smile to everyone, no matter their job or position. It’s the same way she approached patient care as a nurse and stems from a lesson she learned at Seattle U about taking the time to understand each person’s unique circumstance.

“I still really work on being humble in inquiry,” she says. “Those are my Seattle U roots.”