A leader with a heart that's open to the world is how Pat Howell, S.J., describes Pope Francis.

There's much about Jorge Mario Bergoglio, the first Jesuit pope, that rings true for those who are familiar with the Jesuit Catholic character. Choosing to live in a simple residence, eschewing those infamous red slippers and all the brocade and lace are the obvious indicators.

Yet, as he reflected on the pope's first year, Father Howell credited Pope Francis with suggesting the Catholic Church become less narcissistic. In his April 17 talk, Fr. Howell said an energy about the new pope is inimitably Jesuit-namely discernment,  an affirming spirituality that engages the world,  and bridging  disparate traditions.

"Francis says we need to listen to the people, to the sensus fidelium, and that takes discernment," he says.

During a year-long sabbatical, Fr. Howell went to work last fall for America magazine, a national Jesuit publication, and was commissioned along with four other experts to translate into English in-person interviews with Pope Francis conducted by Antonio Spadoro, S.J., editor in chief of La Civiltà Cattolica , the Italian Jesuit journal.

"When the pope was asked 'who are you?' he took a long pause, then said 'first and foremost, I am a sinner, a sinner who is called upon by Christ to act on behalf of the Gospel,'" Fr. Howell says. "The joy of the Gospel fills the hearts and the lives of all who encounter Jesus. Francis says what blocks us from the joy of the Gospel are clericalism, capitalism and all forms of greed and aggrandizement."

The fact that Pope Francis says, "Who am I to judge?" shows his acceptance of all people as children of God, according to Fr. Howell. That includes homosexuals and prostitutes and anyone who's marginalized, he notes.

"Every previous pope has most often assumed the role of judge," Fr. Howell says as he describes the neo-Augustinian nature of Pope Benedict XVI in particular, whose world was cast in shadows and suspicions where a positive openness to the world was viewed as naïve optimism. 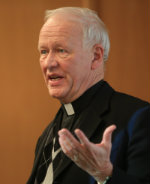 It's discernment versus legalism. Pope Francis and the Jesuits are primarily neo-Thomistic, says Fr. Howell, which means they're open to the world, world affirming and engage the world in dialogue.

Fr. Howell shares many of the magazine covers that have depicted Pope Francis as accessible and down to earth over the past year. A New Yorker cartoon cover of the pope making a snow angel lends a little whimsy and shows how the pope doesn't take himself all that seriously.

When asked, Fr. Howell predicts that Pope Francis and the Catholic Church will accept married clergy rather soon and ordained priests who are married. He wasn't as optimistic about the possibility of women priests, however, but laid out an avenue within the tradition how it could happen

Fr. Howell suggests the need to reform the Roman Curia, to address the sexual abuse crisis, and a desire for someone outside Europe were the primary reasons Pope Francis was elected. Starting with the Vatican Bank in the very first month he was pope, Francis made key appointments and invited eight cardinals to be part of a "kitchen cabinet" not only for the reform of the bank, but for the reform of the Curia itself.

"Every pope is conditioned by his own culture. You can see the South American emphasis in how Pope Francis reaches out to the poor. A year ago, there was much talk when he went to a prison and washed the feet of inmates, including two women. He uses the papacy as a redemption for humanity," says Fr. Howell.

"It's hard to find another pope who has been viewed so positively," he adds.