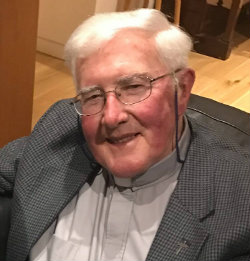 Hugh Duffy, S.J., who served as a visiting professor at Seattle University for eight years, passed away on April 28 at the age of 80. Father Duffy taught English and theology at SU from 2004 to 2012 before returning to his homeland of Ireland.

Remembered as a “gentle Jesuit,” Father Duffy touched many lives as a teacher and priest. At Father Duffy’s funeral in Dublin, Brian Grogan, S.J., eulogized his friend as someone who “wanted people to know that they are loved and appreciated beyond words.”

Tom Murphy, S.J., associate professor of history, says, “Fr. Duffy was extremely welcoming of any Seattle U faculty member who visited Dublin. He delighted in showing one and all the historical and literary sites of the city and the Irish countryside. During the fall of 2013, he hosted me for three months during a sabbatical and always showed an interest in my research while there.

“He was eager to make anyone feel at home in his presence, and I was moved to witness several encounters he had with Protestants from the North of Ireland. He had a way of putting them at ease in the presence of a Catholic priest that illustrated what Fr. Grogan said about him.”

Tessa Marejko, who graduated from Seattle University in 2010 with a nursing degree, took an elective course taught by Fr. Duffy. “I saw passion for what he was teaching,” she writes. “He never tried to push religion on anyone, but rather, gave his students the opportunity to reconnect with it.

“When my mother passed in 2011, he wrote me e-mails, and always checked up on me. I often cried when I read his kind words…We never stopped writing to each other, although our busy lives kept us from writing more frequently. I will never forget him. He was a guiding light in my life, and a symbol of peace and genuine kindness.”

Father Duffy entered the Society of Jesus in Ireland in 1954. He took his first vows in 1956 and final vows in 1974. He pursued his doctoral studies in English at Columbia University and Fordham University and served as a faculty member at a number of institutions in Ireland and the U.S.

A memorial mass for Father Duffy will be celebrated at Seattle University, 11 a.m., Thursday, May 25, at the Chapel of St. Ignatius. Father Murphy will preside. All faculty, staff and students are invited to attend.