Two years ago this month Pope Benedict shocked the world with the news that he was resigning, making him the first pope to step down since 1415. The following month the College of Cardinals did something perhaps even more unexpected when they elected the first Jesuit pope. Since then Pope Francis has surprised and captured the imagination of many. 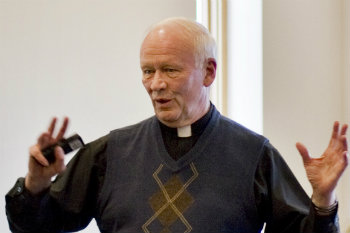 On Thursday, March 5 at 3 p.m. in Wyckoff Auditorium, Patrick Howell, S.J., Distinguished Professor in Residence in the Institute for Catholic Thought and Culture, will examine the future of the papacy in light of Pope Francis's expressed attitudes toward the Catholic hierarchy.

The event flyer reads, in part: "Pope Francis continues to surprise his own Catholic Church as well as the rest of the world. People warm to his frank openness and his embrace of a simple lifestyle. He says that the Church has been too narcissistic, too self-referential and concerned about itself. He has set about a comprehensive reform of the Church. Can it happen? Will it last?"

Father Howell (left) has been a close Francis observer since the beginning of his papacy, delivering the first of many lectures on the pope literally the day after his historic election. Two summers ago while on sabbatical, Fr. Howell assisted in translating of the pope's highly read interview, "A Big Heart Open to God," which appeared in the Sept. 30, 2013 issue of America.

Click here for more information on this and other upcoming events sponsored by the Institute for Catholic Thought and Culture.