A time of deep joy 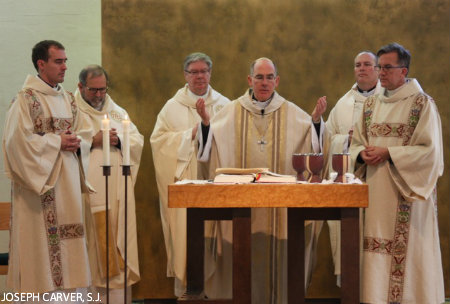 Matthew Pyrc, S.J., campus minister, was ordained a deacon on Saturday, Jan. 25. It was the first ordination ever at Seattle University's Chapel of St. Ignatius. Pyrc (right) was ordained by Seattle Archbishop Peter Sartain (pictured here at the altar). Joining the archbishop in celebrating the mass were (l. to r.) Deacon Eric Sundrup, S.J., editor in chief of the Jesuit Post; Rev. Tom Lucas, S.J., rector of the Arrupe Jesuit Community; Rev. Pat Lee, provincial of the Oregon Province; and Rev. Sean Michaelson, S.J. provincial assistant for formation.

Pyrc is technically a transitional deacon; he will be ordained a priest on June 7 in Spokane.

"The ordination was a profound experience for me filling me with a deep joy and consolation," says Pyrc. "At one point in the ritual I lay prostrated on the floor in front of the altar while we invoke the memory of the Christian community and witnesses, saints, from the time of the apostles to today. We ask them to pray for us. I was moved to tears feeling the presence of the Holy Spirit and knowing that there is a two thousand year history before me. This ordination isn't about me but me vowing to serve in a church meant to serve."

A Michigan native, Pyrc joined the Society of Jesus and entered the Jesuit Novitiate in Portland, Ore. in 2006. As part of his Jesuit formation he studied at the Jesuit School of Theology of Santa Clara University in Berkeley. He holds a Master of Theology and Licentiate in Sacred Theology. His thesis research was on the transformative impact of immersion programs. Pyrc has been at SU since 2011.

In the Roman Catholic Church, deacons are ordained to assist the bishop and his presbyterate as ministers of the word, altar, and charity. They are authorized to proclaim the Word of God, to preach at Mass, to preside at the sacraments of Baptism and Marriage and at the Rite of Christian Burial.