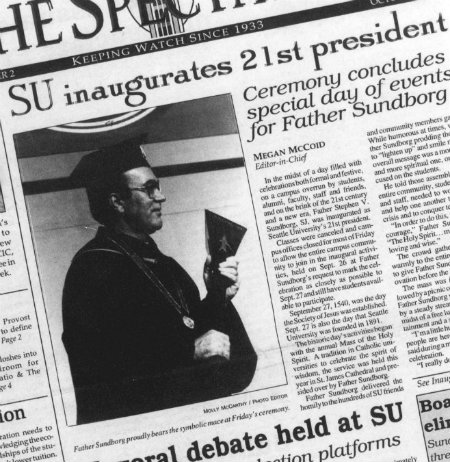 The year was 1997. Gasoline was $1.22 per gallon…The Mariners, playing in the yet-to-be-imploded Kingdome, won the AL West…During a boxing match, Mike Tyson bit off a portion of Evander Holyfield’s ear…And one of the top movies of the year was “Men in Black.”

Here at Seattle University another “man in black” was taking the reins as its leader. Twenty years ago today—Sept. 26, 1997—Stephen V. Sundborg, S.J., became the 21st president of SU. The inauguration was held on that date “at Father Sundborg’s request to mark the celebration as closely as possible to Sept. 27 and still have students available to participate,” The Spectator  wrote on Oct. 2, 1997, explaining: “September 27, 1540, was the day the Society of Jesus was established. Sept. 27 is also the day that Seattle University was founded in 1891.”

Held at Connolly, the installation ceremony culminated a full day of festivities that included the Mass of the Holy Spirit at St. James Cathedral and a picnic on the Quad.

The Commons recently asked Father Steve what he remembers most about his inauguration day. Here’s what he shared in his own words:

“I totally forget anything I said in my own inaugural address,” the president continued. “Photos show I looked young.”

More coverage of Father Steve’s 20th anniversary as president can be found in the latest SU Magazine, now online at SU News.

For coverage of the president's inauguration, visit The Spectator.