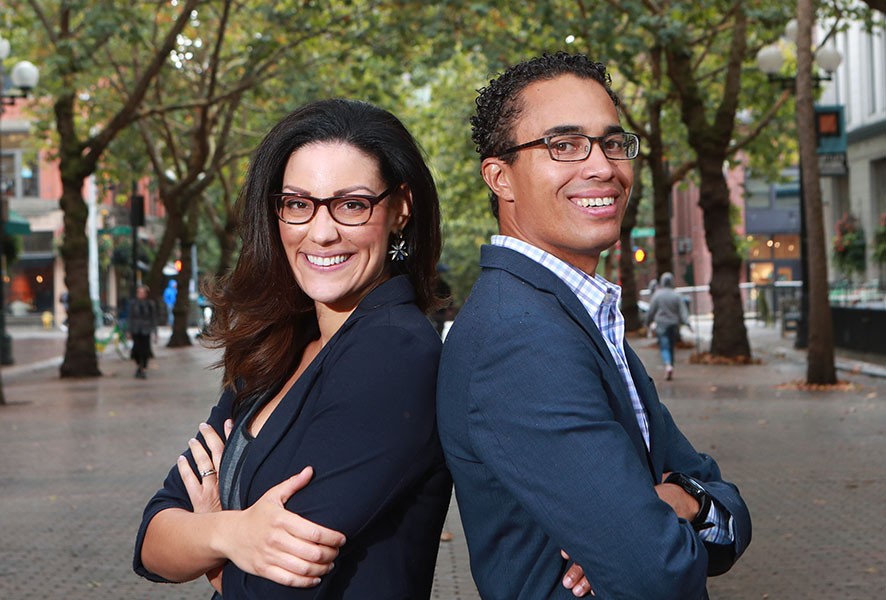 Angeline Overturf Thomas, ’11, lived in Los Angeles. Stephan Thomas, ‘11, lived in Chicago. After a long-distance romance, they had decided to get married before setting mutual plans for law school in motion. Stephan, who took the lead on researching schools on the couple’s behalf, says Seattle University’s School of Law stood out because of its social justice mission. “That was exactly where I wanted to be,” he says. The couple flew to Seattle, toured the campus, met the college deans and made it clear they were a package deal. Before the end of the tour, “we were sold,” Angeline says.

Two months later they got married, packed up their car and drove to Seattle to start class one week after their wedding.

Life hasn’t slowed down since. The couple has become a fixture in Seattle where they are making significant contributions to the legal and nonprofit fields, all while raising their young son.

As the director of community justice initiatives, Stephan serves as a policy advisor to King County’s elected prosecutor on restorative justice, community partnerships and criminal justice reform. He also volunteers for the King County 180 Program through which he motivates troubled youth to change their ways by sharing his story of growing up in Chicago’s South Side neighborhood. He chose his career in the prosecutor’s office after one of his Seattle U mentors said the powerful office needed diverse perspectives that could empathize with offenders and victims. “The mentors I had in law school were hugely influential,” he says.

Angeline is the executive director of Washington Appleseed, a nonprofit that engages volunteer attorneys and community organizations to address societal change through policy and legal initiatives. When Angeline entered Seattle U she didn’t know the meaning of public interest law. But she quickly discovered it was her calling. “For me there was a sense of not knowing what a social justice lawyer was all about,” she says. “I found my people immediately. It opened up a whole range of what I could do with this degree and a network to do it.”