AI is here to stay, but are we sacrificing safety and privacy? A free public Seattle U course will explore that 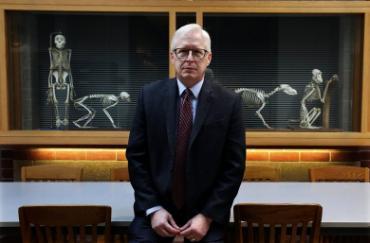 The future of artificial intelligence (AI) is here: self-driving cars, grocery-delivering drones and voice assistants like Alexa that control more and more of our lives, from the locks on our front doors to the temperatures of our homes.

But as AI permeates everyday life, what about the ethics and morality of the systems? For example, should an autonomous vehicle swerve into a pedestrian or stay its course when facing a collision?

These questions plague technology companies as they develop AI at a clip outpacing government regulation, and have led Seattle University to develop a new ethics course for the public.

Launched last week, the free, online course for businesses is the first step in a Microsoft-funded initiative to merge ethics and technology education at the Jesuit university.

Seattle U senior business-school instructor Nathan Colaner hopes the new course will become a well-known resource for businesses “as they realize that [AI] is changing things,” he said. “We should probably stop to figure out how.”

The course — developed by Colaner, law professor Mark Chinen and adjunct business and law professor Tracy Ann Kosa — explores the meaning of ethics in AI by looking at guiding principles proposed by some nonprofits and technology companies. A case study on facial recognition in the course encourages students to evaluate different uses of facial-recognition technology, such as surveillance or identification, and to determine how the technology should be regulated. The module draws on recent studies that revealed facial-analysis systems have higher error rates when identifying images of darker-skinned females in comparison to lighter-skinned males.

The course also explores the impact of AI on different occupations.

The public’s desire for more guidance around AI may be reflected in a recent Northeastern University and Gallup survey that found only 22% of U.S. respondents believed colleges or universities were adequately preparing students for the future of work.

Many people who work in tech aren’t required to complete a philosophy or ethics course in school, said Quinn, which he believes contributes to blind spots in the development of technology. Those blind spots may have lead to breaches of public trust, such as government agencies’ use of facial recognition to scan license photos without consent, Alexa workers listening to the voice commands of unaware consumers and racial bias in AI algorithms.

As regulations on emerging technology wend through state legislatures, colleges, such as University of Washington and Stanford University, have created ethics courses to mitigate potential harmful effects. Seattle University’s course goes a step further by opening a course to the public.

The six-to-eight-hour online course is designed to encourage those on the front end of AI deployment, such as managers, to understand the ethical issues behind some of the technologies. Students test their understanding of the self-paced course through quizzes at the end of each module. Instructors will follow up with paid in-person workshops at the university that cater to the needs of individual businesses.

The initiative was spawned by an August 2018 meeting between Microsoft president Brad Smith and Seattle University administrators, in which the tech company promised $2.5 million toward the construction of the school’s new engineering building. The conversation quickly veered into a lengthy discussion about ethical issues around AI development, such as fairness and accountability of tech companies and their workers, said Michael Quinn, the dean of the university’s College of Science and Engineering.

At the meeting, Microsoft promised Seattle University another $500,000 to support the development of a Seattle University ethics and technology initiative. Quinn called the AI ethics lab a “natural opportunity to jump at” for the college that requires an ethics course to graduate. It was already a topic circulating around campus: Staff and faculty had recently spearheaded a book club to discuss contemporary issues related to ethics and technology.

The initiative will also provide funding for graduate research assistants to create a website with articles and resources on moral issues around AI, as well as for the university to hire a faculty director to manage the initiative. Seattle University philosophy professors will offer an ethics and technology course for students in 2021.

Quinn believes institutions of higher education have a role in educating the public and legislators on finding a middle ground between advancing AI technology and protecting basic human rights. “People are starting to worry about the implications [of AI] in terms of their privacy, safety and employment,” Quinn said.

AI is “developing faster than legislation can keep up with, so it’s a prime subject for ethics,” said Colaner. He is particularly concerned about the use of AI in decision making, such as algorithms used to predict recidivism rates in court, and in warfare through drone strikes.

Washington state Sen. Joe Nguyen, D-White Center, agrees that higher education has a large role in preparing the public for a future more reliant on AI. In an industry setting, said Quinn, employers often push workers to advance technology as far as possible without considering its impact on different communities. AI ethics in education, however, serves as a “safeguard [for] meaningful innovation, offers a critical eye and shows how it impacts people in a social-justice aspect.”

Ahead of the current session, Seattle University instructors consulted Nguyen on draft legislation about an algorithmic accountability bill that was re-introduced this legislative session after failing to pass last year.

The bill would provide guidelines for the adoption of automated systems that assist in government decision making, and requires agencies to produce an accountability report on the capabilities of software as well as how data is collected and used.

Law professor Ben Alarie, who is also the CEO of a company that uses AI to make decisions in tax cases, believes the public accessibility of the Seattle University course could help businesses avoid potential disruptions.

“One of the benefits of having a program like this available to everyone, is that businesses … can build in safeguards and develop these technologies in a responsible way,” he said.