Professor Mary Alberg Gives a Talk at the APS Conference 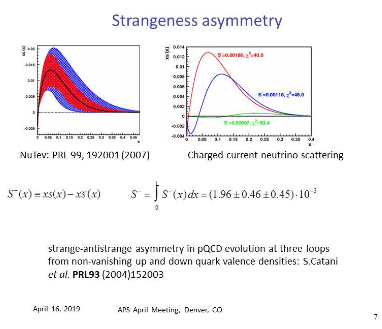 Mary Alberg presented a talk "Strange crossings in the proton sea", in the session on "Valence- and Sea-Quark Structure of the Nucleon" at the April 2019 Meeting of the American Physical Society (APS) in Denver, Colorado. Her talk was based on research done in collaboration with SU physics major Chase Kim.

Net strangeness in the proton is zero, but the momentum distributions of the s and sbar quarks in the proton sea may differ. This strangeness asymmetry, s(x)-sbar(x), arises from fluctuations of the proton into meson-baryon pairs. We use a Fock state expansion of the proton, in terms of K-Lambda, K-Sigma,  K*-Lambda, and K*-Sigma states, to represent this “strange meson cloud”, in which s quarks reside in baryons and sbar quarks in mesons. We determine the momentum distributions of the strange quarks in a hybrid convolution model, in which the fluctuations are represented either by light-cone or meson-baryon splitting functions.  For the parton distributions of the s(sbar) quarks in the “bare” baryons(mesons) of the Fock states, we use light cone wave functions or our statistical model, which expands the bare hadrons in terms of quark-gluon states. We present our results for strangeness asymmetry, which include one or more zero crossing points, and compare them to global parton distributions and other theoretical work.
*This work is supported in part by the Research in Undergraduate Institutions Program of the US National Science Foundation under Grant No. 1516105.