An overcurrent event or fault is when the current (amperage) in an electrical circuit exceeds the rated capacity. There are many possible sources for an overcurrent fault such as a short, power cross, surge, etc. These faults can permanently damage the follow-on electronics and may cause serious injury.

Aavid Applications Engineering Support
Aavid Thermalloy engineers can assist with the design of heat sinks for both forced and natural convection applications. Frequently we have already encountered a situation similar to yours and may have a solution readily available. If not, we will start from scratch and help you design a cooling strategy uniquely tailored for your application. www.aavidthermalloy.com

Need to find a part? Try these search engines for parts or try the online distributors listed below.

Keep up to date on the latest technology & design news - Free magazine subscriptions!

PIC16F84A3fcb Datasheet Get Started with your first PIC program

This is a very basic hobby project and can take less than an hour. 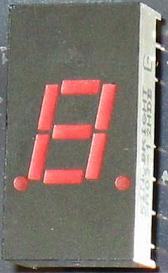 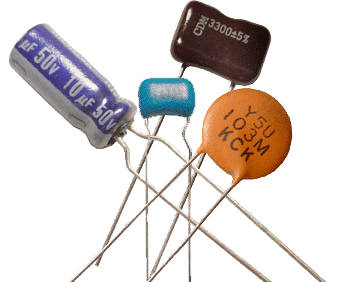 REVERSE POLARITY OF ELECTROLYTIC & TANTALUM CAPACITORS CAN CAUSE
FIRE & EXPLOSION

Capacitors having a value of about 0.47 micro-farad or greater are often Electrolytic or Tantalum (polarized) types. This means that it is very important how they are connected. Polarized capacitors are almost always marked with the polarity on the body of the component. If the two capacitor leads are of different lengths then the longer of the two is usually the + (positive) terminal. Only non-polarized capacitors may be fitted to the breadboard or PCB either way, in the same way as resistors.

Surest way to damage an electrolytic capacitor is to reverse polarity at working voltage, self-destruction will occur and violent.

Use safety glasses and keep eyes and body parts away when applying power for the first time to a circuit that includes polarized capacitors. Discard any damaged parts.

Four-color-band axial resistors
Main article: Electronic color code
Four-band identification is the most commonly used color coding scheme on all resistors. It consists of four colored bands that are painted around the body of the resistor. The scheme is simple: The first two numbers are the first two significant digits of the resistance value, the third is a multiplier, and the fourth is the tolerance of the value. Each color corresponds to a certain number, shown in the chart below. The tolerance for a 4-band resistor will be 1%, 5%, or 10%

5-color-band axial resistors
5-band identification is used for higher precision (lower tolerance) resistors (1%, 0.5%, 0.25%, 0.1%), to notate the extra digit. The first three bands represent the significant digits, the fourth is the multiplier, and the fifth is the tolerance. 5-band standard tolerance resistors are sometimes encountered, generally on older or specialized resistors. They can be identified by noting a standard tolerance color in the 4th band. The 5th band in this case is the temperature coefficient

SMT resistors
This image shows two surface mount resistors
Surface mounted resistors are printed with numerical values in a code related to that used on axial resistors. Standard-tolerance Surface Mount Technology (SMT) resistors are marked with a three-digit code, in which the first two digits are the first two significant digits of the value and the third digit is the power of ten (the number of zeroes). 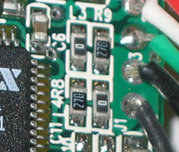 "0", "000", and "0000" sometimes appear as values on surface-mount zero-ohm links, since these have (approximately) zero resistance.