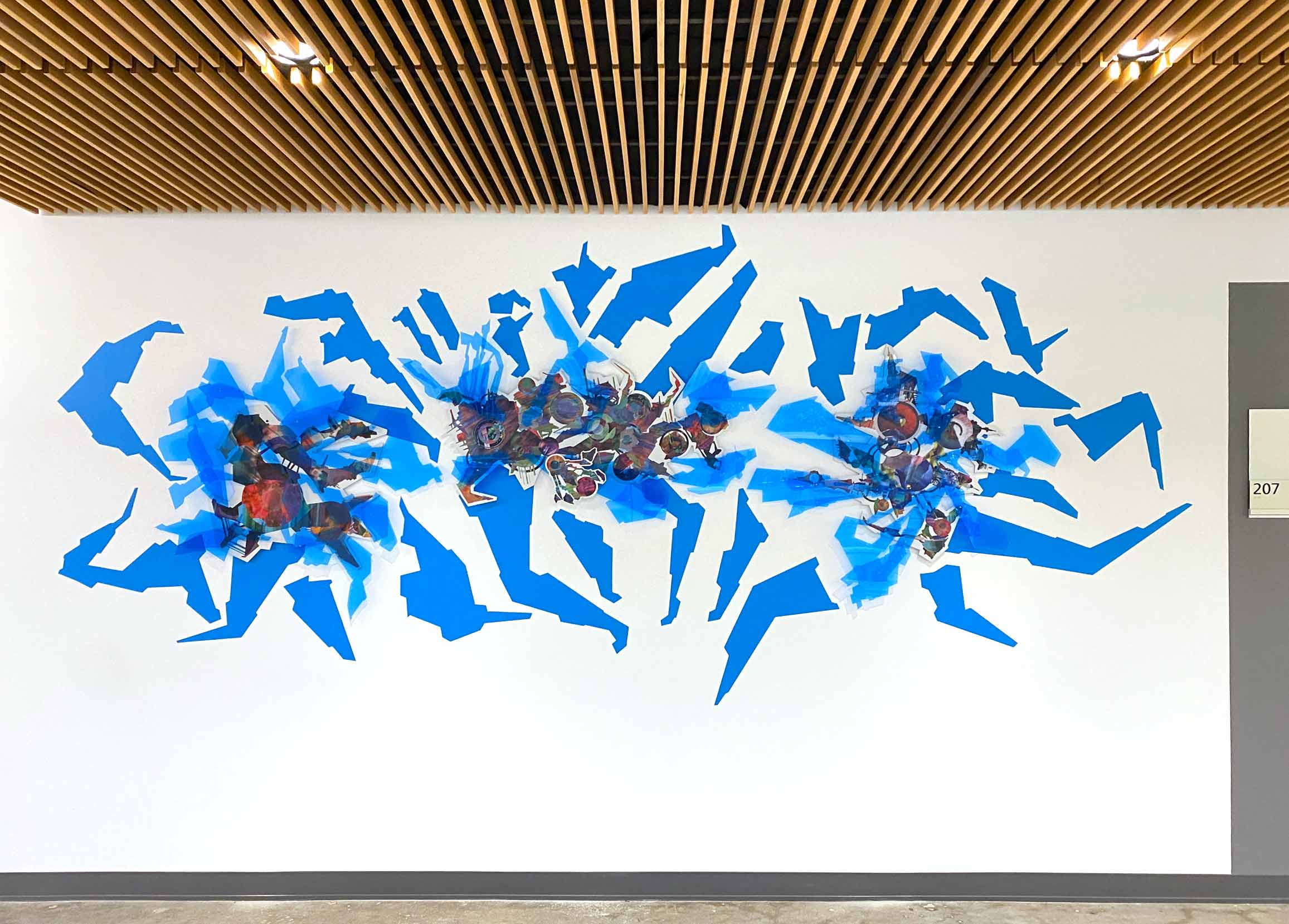 We are excited to announce the installation of Meta Memory by Craig van den Bosch in the Department of Electrical and Computer Engineering on the Bannan 2nd floor.

The CSI Art Committee has been working to build the art collection for the new Jim and Janet Sinegal Center for Science and Innovation. The Bannan Building and the Engineering Building are included in that collection and Meta Memory is the first piece of artwork to be installed. The 2nd floor was remodeled as part of the CSI project last year and this artwork energizes the hallway and will inspire many students, faculty, staff and visitors for years to come.

This piece is actually a combination of 3 artworks (shown above), Meta Memory #15, #42, and #126. The artist, Craig van den Bosch, installed the pieces as a group and then placed hand cut blue vinyl in patterns reflecting the artwork around the pieces to expand their impact.

Van den Bosch describes the work and his process below:

Memory provides us the ability to build upon previous experiences creating context for navigating conversations, day-to-day tasks and life itself. Until recent history, the brain and body served as the sole means of retaining information through written, drawn, verbal and visual expression and documentation. With the 19th and 20th century advent of photography, audio recording and film, biological memory was aided with additional storage and recollection capabilities allowing moments and experiences to be preserved for later viewing and sharing. Paving the way for relatively limitless documentation, digital technology could theoretically be a viable way to document first, second and third person experiences of every moment of every life. Technologies like video, photography, audio, augmented and virtual reality create a facsimile of an experience, a new experience that becomes a unique and real memory which can then be studied, considered and recontextualized as a separate experience from the actual and/or original.

Through social media and various methods of file exchange and storage, the ability to share the ubiquitous digital memory and experience becomes easier creating public accessibility and sharing at an unprecedented rate. Even though the experience originates in the past or present moment through live streaming, these new impressions live on reshaping future experiences, conversations and impressions of a person’s experiences, words and actions.

When processing and revisiting a live or recorded reality, several questions may arise. What is the value of these saved experiences? Who is the owner? How do these facsimiles evolve over time to become real lived experiences? How do these recontextualized experiences influence our future decisions and experiences? What are the criteria for delineating the difference of private versus public information? Do people reveal too much about their personal experiences? How is privacy defined in the 21st century and beyond? Influenced by the bright color palette and process of recording Australian Aboriginal “Dreamings”, the stories and beliefs behind creation, these selected works from the series Meta Memory: Digital Facsimile Retrospection Recontextualized cull through my personal images placing them in a high visibility environment while still preserving the privacy my lived moments.

Dreamings, originally exclusively ephemeral, are observed experiences connected to their environment. These stories find their way into celebration and ceremony, recorded on bodies, dirt, trees or rocks and are passed through the oral storytelling tradition from generation to generation. During the 1970s, Several Australian Aboriginals began using acrylic paint and canvas to preserve these stories. Because of the personal and sacred nature, choices were made about how much of the story to reveal in public. Some aspects of the stories are left out, only so much of the story is told. Despite being incomplete, for me, there is still a connection to the universal story of the human condition along with the respect I have for the knowledge and connection to place that an Indigenous people develops over the course of tens of thousands of years. The knowledge of maintaining a symbiotic and respectful connection to the environment.[1]

Combined with social media, digital artifacts can reveal more than some individuals may desire. My goal is to take moments in time and nest them into one memory, modifying and tweaking each image set until the original context is indecipherable, a visual encryption. Even though the outside viewer no longer has free access to the individual memories, the aesthetic qualities can be consumed and become a new experience for the viewer. I also incorporate what I call Nanobots as the translucent top layer and vinyl wall symbols found hovering over the piece. These symbolize technology as the possible system managers that organize, manipulate and move the memories from place to place. Originally inspired by Ray Kurzweil’s book The Singularity Is Near: When Humans Transcend Biology, these designs and concepts have made their way into most of my work over the last fifteen years.

Originally, I looked through thirty to fifty thousand digital photos that I had taken over the last fifteen to seventeen years. I identified important moments and placed them into groupings of five to six images. Sometimes they were sequential moments covering a few seconds of time, sometimes it was over a period of hours or even days either at the same or different location. Sequences could consist of first, second or third person experiences. Once I found a grouping that made sense to me, I stacked them in layers of varying transparency in Photoshop, similar to how images that are taken in a storefront window are comprised of a foreground, middleground and background but are simultaneously in front and behind you achieved through reflection, transparency and overlap. Compositional considerations are then made when overlapping layers of transparent images. After, I began to tweak the coloration and clarity of each layer. Next, I began cutting the composited image of the individual layers into geometric shapes or “puzzle” pieces creating a bank of about four hundred and fifty individual new discreet compositions. Having spent about twenty years making collages, I used those skills to pull from my own source material as if it were images found among random books and magazines. I enjoyed the freedom of acting like a stranger to the images of my own life. It also brought up questions about appropriation of both artists and cultures and cultural practices. There was a reshaping of my own memories from the perspective of being an outsider stumbling upon some unexpected treasure trove of aesthetically interesting digital compositions. Once I finished creating the new composition, I then made a cut path in Adobe Illustrator around the piece to outline the unique edges. I wanted the contour of the pieces to look nebulous like an amoeba or a galaxy. The translucent acrylic pieces were also drawn in illustrator and were laser cut, drilled by hand using a specific drill bit for plastic and then mounted off the surface using stainless steel hex bolts and acrylic standoffs. The images are printed on dibond, a cut plastic material that consists of a flexible polyethylene core covered with a thin aluminium sheet on each side, and is finished with a high quality lacquer similar to something seen on a highway or storefront. It is UV stable and can survive a variety of extreme temperature variations. After I receive all of the pieces, I then compose the acrylic shapes over top of the dibond image. Once in place, I hand drill each piece and then assemble it. For the vinyl, I individually draw and hand cut each piece. The vinyl gives me the flexibility to expand the footprint of each piece whether it is singular, diptych, tryptic or more pieces grouped together in a space. So, even though the work is digital, there is still quite a bit of analog process too.