Where can I find the library's most recent acquisitions? 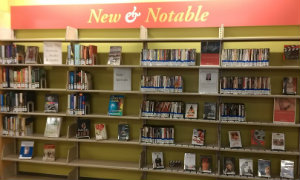 Q:  Where can I find the library's most recent acquisitions?

A:  The Lemieux Library and McGoldrick Learning Commons is pleased to bring back "New & Notable," a popular service that was last offered before the library's 2010 renovation and expansion. Located on the library's third floor near the Circulation Desk, "New & Notable" features the latest acquisitions in books and media.

One of the notable items you'll currently find on the shelves is an extraordinary film collection of Roger Gillis, S.J., a beloved Jesuit who died in 2010. Fr. Gillis, who had a passion for film, developed a huge collection of more than 400 films (DVD and VHS) including Oscar nominees and winners as well as American Film Institute (AFI) classics. The films cover over 75 years of filmmaking.

All materials are loaned according to current circulation policies. Swing by the third floor of the library to see what's new and notable.