What is the most unique tree on our campus? 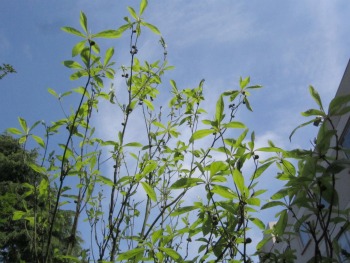 Q:  What is the most unique tree on our campus?

A:  After speaking with SU gardener Becki Koukal-Liebe, all signs seem to point to the Franklinia alatamaha located in the Biodiversity Garden behind Loyola Hall. The tree “is unique in that it is the sole member of the Franklinia genus, an uncommon occurrence in plant taxonomy,” explains Koukal-Liebe.

Botanists John and William Bartram encountered “The Lost American Tree,” as it has come to be known, near the Altamaha River in Georgia in 1765. The tree has not been found in the wild since 1803, and there are only 2,046 trees of its kind worldwide, according to 1999 data. The few Franklinia trees living today come from the seeds collected and planted in the Bartrams’ Philadelphia garden.

Koukal-Liebe writes: “My tree and shrub bible, Manual of Woody Landscape Plants by Michael A. Dirr says, ‘if one is so fortunate to procure this species he/she should provide it a place of prominence in the garden; an aristocrat because of its interesting history.’”