What are the benefits of the recently installed lights in the Murphy Garage?

Last summer Seattle University replaced all the lights in Murphy Garage with energy-efficient LED lights. About 200 fixtures were replaced on all levels of Murphy Garage. SU’s own Electrical Shop did the work.

“We completed the retrofit because it was a good way to save energy, improve lighting and save on our energy bills,” explains Bryan Accra, manager of Facilities Operations/resource conservation manager.

“The Murphy Garage,” he continues “had old-style high pressure sodium lights that were really inefficient compared to LEDs. Each fixture required 175 watts, and by replacing them all with 48-watt and 58-watt LEDs, we were able to reduce the power demand by 70 percent. Since these fixtures need to run 24/7, we were able to reduce the annual energy consumption from over 300,000 kilowatt hours (kWh) to less than 100,000 kWh.”

“We (initially) estimated annual cost savings of $15,000 with a payback period of 2 ½ years,” says Accra. “With electric rates increasing faster than anticipated and our electricians having installed some fixtures with daylight and occupancy sensors, our bills are reflecting even greater savings and we are actually seeing a better payback now.”

Accra puts the revised annual cost savings at $20,000 and anticipates the project will fully pay for itself in less than two years.

A smaller carbon footprint and cost savings aren’t the only advantages made possible by the retrofit. The improved lighting brings benefits in terms of visibility and safety, too. 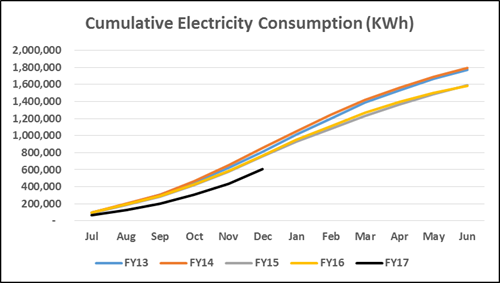 The energy savings brought about by the LED retrofit are reflected in this chart, which includes electricity consumption in the Murphy apartments and garage.

As Accra adds, "The Murphy Apartments have electric heating so despite the colder winter this year, we are still using less energy than previous years. Savings in FY15 and FY16 were due to warm winters. Seattle City Light is a Carbon Neutral Utility so while the carbon footprint would be smaller for most utilities, Seattle is an exception. With that said, it reduces the demand on the grid which over the long haul reduces the need to expand infrastructure."

If you’d like to see other sustainability projects SU has done or get involved in making the campus more sustainable, please visit the Center for Environmental Justice and Sustainability.