(Correction: Due to an error in The Wall Street Journal/Times Higher Education College Ranking, Seattle University was identified as being ranked #1 among all schools in Washington. The publication has since corrected the error, and the adjustment is reflected below.)

We officially turned 125 (as of yesterday, Sept. 27), hosted a major, state-wide event, received a high ranking and welcomed a new Director of Athletics…and it's only Wednesday. Here's a quick roundup of what's been going on around campus these past few days and what's ahead.

Best in Washington |  When it comes to investing in its students and providing an environment that fosters their success, Seattle University is tops among all of Washington's independent institutions, according to the latest college ranking.

Seattle University is among the top colleges and universities included in the inaugural The Wall Street Journal/Times Higher Education college ranking. Covering more than 1,000 institutions, the WSJ/THE College Ranking lists the top 200 colleges and universities in the land. SU is ranked first among independent Washington schools, #2 overall in the Northwest and 116th in the nation.

Here's how the publication describes the new ranking: "Developed in partnership with US experts and universities, the ranking captures four key areas of performance-the resources available to support education at an institution, the ability of degree programs and teaching to stimulate learning, the diversity and inclusiveness of the campus environment, and the contribution of an institution to students' success.

"One way the WSJ/THE rankings stand apart from (other rankings) is by incorporating results from a survey of 100,000 college students."

You can read more about the WSJ/THE ranking here; you will need a subscription to view the full list. 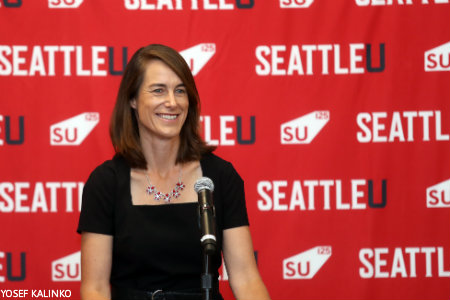 SU Names New AD | Shaney Fink (right) was introduced as Seattle University's new director of athletics at a press conference this morning. She will begin Nov. 1. Fink comes to Seattle U from the University of San Diego, a Catholic university, where she most recently served as senior associate athletics director and senior woman administrator. Her full tenure at USD spanned more than 17 years and included previous roles in compliance and student services, academic support and as an assistant volleyball coach for the Toreros.

After being introduced by President Stephen Sundborg, S.J., Fink said, "The mission of this university and the history of 125 years of (delivering) a Jesuit Catholic education is so important to me, and I am so happy to be part of this community. The commitment to educating the whole person, the academic rigor-all of this was part of my important, absolutely 'have-to-have' when I'm looking at an institution."

Fink went on to lay out a vision for SU athletics that includes academic excellence, leadership development and "winning with integrity."

"Our real success," she continued, "is going to be when we see our athletes, five, 10, 15 years later, and see the success they have in the community and the world, and the success that that inspires in other people."

In a news release issued by Athletics, President Sundborg, S.J., said, "Seattle University is proud of its athletic program and we are confident that Shaney Fink will build on our success and take the entire program to a higher level. It is exciting to welcome her to Seattle U. She is a dynamic leader who brings great experience from an excellent athletic program at the University of San Diego."

Both Father Sundborg and Fink praised her predecessor Bill Hogan for laying the groundwork for future success. Hogan is continuing to serve the university as Assistant VP for Athletics Advancement.

You can read more about Fink's background at goseattleu.edu and see the full slideshow of the press conference here. There's also a video posted here. 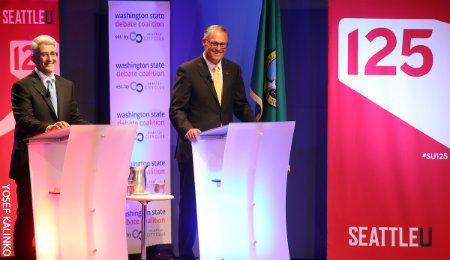 Civic Engagement | Seattle University was the place to be the evening of Monday, Sept. 26, as Bill Bryant and Jay Inslee squared off for the first gubernatorial debate of 2016 and the only one that will take place in western Washington. A packed Pigott Auditorium watched the candidates spar over a variety of policy issues important to the future of our state.

Addressing the audience before the proceedings, President Stephen Sundborg, S.J., said, "It's my pleasure to welcome you to tonight's Washington State gubernatorial debate organized by the Washington State Debate Coalition and hosted by Seattle University as part of our 125th anniversary celebration. Our Jesuit ethos puts a high value on civic engagement, and so we proud to partner with the Debate Coalition of the Seattle CityClub, which was founded to enhance political dialogue."

(Visit slideshow for more images from the debate.)

Mass of the Holy Spirit and 125th Kickoff | This most momentous week continues tomorrow (Thursday, Sept. 29), when we kick off our 125th anniversary with the Mass of the Holy Spirit and a celebration immediately afterward on the Union Green. You are invited to participate in any and all of the festivities. Be there! And in case you missed it, here's how SU's founding day was celebrated yesterday: 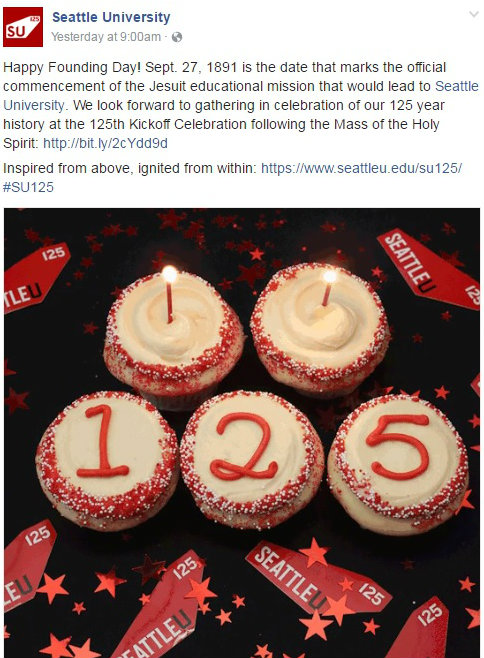