Since SU's Community Service Leave benefit was launched in 2009, many staff members have used it to plug into a variety of volunteer opportunities in the community. Two staff members recently took this a step further-actually many steps further-when they started a successful running and wellness program for girls at Bailey Gatzert Elementary School.

It all began when Mary Beth Falkner, Education Abroad specialist, and Mallory Torgerson, administrative assistant in Student Academic Services, volunteered as Running Buddies through Girls on the Run (GOTR), an international organization that promotes fitness and wellness among third through fifth grade girls. Finding the experience rewarding, they felt pulled to get involved in a deeper way.

Falkner approached Eddie Lincoln, assistant director of the Seattle University Youth Initiative (SUYI), with the idea of starting a GOTR program at Bailey Gatzert. It seemed a natural fit as the organization's mission aligned nicely with that of the Youth Initiative, SU's partnership with the community to enhance educational opportunities for youth in the immediate neighborhood. Lincoln, SU's main liaison to the elementary school, had long wanted to bring a program like GOTR to Gatzert and gave his enthusiastic support. Falkner next confirmed that Torgerson was on board, and off they ran. 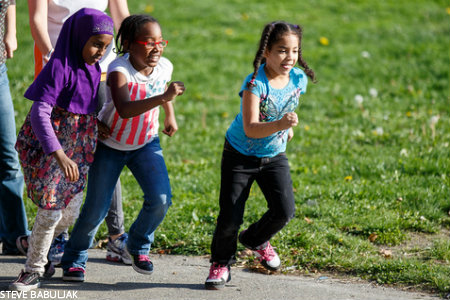 There was some trepidation at first. "It was a learning curve," says Falkner. "Neither of us had worked with kids that age." But after undergoing extensive training and immersing themselves in the GOTR philosophy and curriculum, Falkner and Torgerson were ready to launch the program. Twice a week over the course of the 10-week fall season, the two SU staffers made their way to Bailey Gatzert to lead the after-school program, which included 12 girls between the ages of 8 and 10.

While the act of running may be the distinguishing characteristic of the GOTR program, there's so much more to it than that. The curriculum integrates such topics as self-esteem, healthy living, respect for one another and engaging with the community.

"We'd start out each session by talking about whatever the lesson was that day," explains Torgerson. "Then we would go outside and stretch and continue talking about whatever the topic of the day was and get the girls to do some sort of activity relating to it. And then the rest of the practice would be some sort of running activity. We also had activities for whenever they ran a lap-getting a sticker or writing down something they were grateful for."

The GOTR curriculum also includes a community engagement project. For the fall season, the girls came up with the idea of making cards for young patients at Children's Hospital.

The season culminated with the girls participating in GOTR's 5K run. "The goal was to try and have them run more every week," says Falkner. "At the beginning, with a lot of the girls, it was like pulling teeth to get them to run one lap, but by the 5K, we had some girls who were running nine-minute miles the whole time which, especially at eight years old, is pretty great. It was so fun to see these girls-who might have never accomplished something like that-with smiles on their faces as they ran across the finish line."

Adds Torgerson: "We had students from families who were really struggling financially or had other home-life issues, and yet so many of their parents and siblings came to the event. Some of them took the bus. It was really cool to see the engagement of the families."

With one season under their belts as GOTR coaches, Falkner and Torgerson are gearing up for the spring sessions which begin early March. They've both been at SU for about four years and have been students in the Master of Public Administration program-Torgerson recently graduated and Falkner is set to follow suit in the spring. They are particularly grateful for the support they are receiving for their efforts at Bailey Gatzert.

Torgerson adds that she is grateful "to know that we aren't doing this by ourselves but that we're part of a bigger Youth Initiative. I've had a lot of great experiences at SU, but this is probably the best one for me so far."

“The program took the school by storm,” says the Youth Initiative’s Lincoln, who adds that Gatzert parents, students and teachers alike have all insisted that the program continue. “That is a credit to Mary Beth and Mallory’s leadership and passion for the young ladies in the program. I cannot imagine two better Seattle University staff members to launch this program. Everyone in the Gatzert community looks forward to the program in the spring.”