Turning a Challenge into a Gift

Building a simple paper pyramid at Washington Middle School sounds like an unassuming art project, yet Maia Schumacher sees something much more.

This Seattle University freshman from Tacoma describes how constructing small pyramids in the school art room opens the door to fruitful conversations about learning disabilities among middle schoolers. Unlike other school subjects, she says, art doesn't have quite the same rules and barriers to learning.

"Each side of the pyramid becomes a symbol for conversation. I might ask what they struggle with at school on one side, what they dislike on another, what they love on another," says Schumacher, who recently was named co-coordinator for the SU chapter of Eye to Eye, a mentor-based program with 56 chapters around the country. Eye to Eye helps build self-esteem and promotes self-advocacy in children with dyslexia, other learning disabilities and ADHD. Schumacher says the SU chapter will send her to a youth leadership conference at Brown University this summer.

Schumacher made an excellent impression on Susan Huntley, tutoring coordinator at Washington Middle School. Huntley says Schumacher was gracious, friendly and eager to help with both Eye to Eye and the Homework Club.

A future nurse anesthetist, Schumacher is a go-getter with a strong work ethic. She was one of six students in the nation to win a top award from Learning Ally, a nonprofit that serves those with learning and visual disabilities. Rich Okamoto, director of Disabilities Services, says Schumacher is the first SU student to win this national achievement award.

Since elementary school, Schumacher has struggled with severe dyslexia, making it difficult for her to spell, decode words and decipher directions. As reading assignments grew in complexity, she required assistance. By the fifth grade, Schumacher also began to use Kurzweil, special reading technology with literacy support.

Even with assistance, book reports, math and science were still a struggle when Schumacher reached high school. Plus, as a young teen, she didn't want her peers to know she had a learning disability.

That's when she discovered Learning Ally and started using its audiobooks. Learning Ally's collection of more than 80,000 human-narrated textbooks and literature titles is the largest in the world and can be downloaded on mainstream smartphones and tablets.

"Learning Ally gave me confidence in myself and my abilities. Technology is the key to success for me," she says. "Plus, Learning Ally is available to me in all phases of life."

In her essay for the $6,000 national award, Schumacher highlighted how she developed a newfound sense of independence, rose to the top of her class in high school and, as a college freshman, already is focused on pursuing a master's degree and a nursing career.

"I picked the school that best meets my needs," she says. "SU is so accepting of everybody's needs. It's all encompassing. At SU, I can build connections with my teachers, the Disabilities Office and other students."

Last week, Schumacher and her mother Susan and grandmother Janet traveled all-expenses-paid to the Smithsonian in Washington, D.C., to thank supporters, volunteers and sponsors for her scholarship. Learning Ally staff also came to SU to make a video of Schumacher and her supporters to feature at the awards' gala. 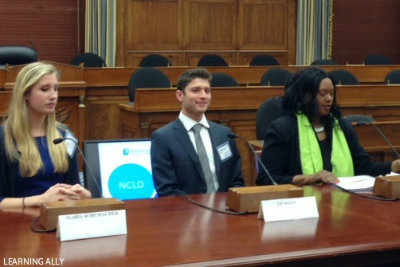 Schumacher then had an opportunity to speak her mind at a dyslexia panel that met with Congressional staff members in the U.S. Capitol April 25.

"Schools are not set up in a way to help kids with learning disabilities. They hold us back," she told them.

She has advice for others with challenges similar to hers.

"Don't let your learning disability define you," she tells them. "Dyslexia is a gift in the form of a challenge."