With the sunset now occurring earlier in the day, the first instinct is to walk inside, into someplace warm, into someplace with lights and noise. What a coincidence, it's time for college basketball!

The Seattle University basketball teams have been preparing for their upcoming seasons as soon as they completed the final game of their previous campaign, whether it was the College Basketball Invitational semifinal against Loyola Chicago or the thrilling overtime game against New Mexico State in the semifinals of the WAC Women's Basketball Tournament.

In 2014-15, the Redhawk men, under seventh-year head coach Cameron Dollar, accomplished several things not done by the Seattle U program in close to 50 years. A run to the WAC Tournament final, followed by thrilling victories over Pepperdine and Colorado in front of capacity crowds, should pique everyone's interest in the Seattle U men's basketball program. 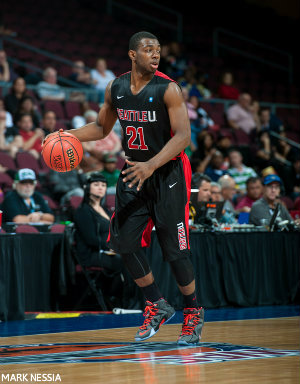 Leading the way are senior Jack Crook and junior William Powell (left), the two returning starters from last year's 18-16 squad. Powell was voted Second Team Preseason All-WAC by the conference coaches, and Dollar is looking to him to take more of a leadership role, especially on the offensive side of the game. Crook has been a steady force in the post for the past three seasons and, with several newcomers joining the squad, he will also need to be a leader as the Redhawks strive to be contenders within the Western Athletic Conference.

There will be 17 home games for the Seattle U men this season, including 15 games at KeyArena against schools such as Eastern Washington, UC Santa Barbara, and UC Davis. The conference schedule will be challenging, but the Redhawks won 11 of their last 12 home games in 2014-15, proving that there is indeed a home court advantage when teams come to the Pacific Northwest.

The Seattle University women's basketball team returns seven letterwinners and four starters from 2014-15, including leading scorer Taelor Ross (above), who ranks in the top five in Seattle U's career blocks record heading into her senior campaign. Head coach Joan Bonvicini also enters the season with 692 career wins, currently 10th on the wins list for Division I active women's basketball head coaches, and looks to pick up her 700th career win in 2015-16. The Redhawks welcome five newcomers, including Delanie Parry, who sat out the 2014-15 season due to NCAA transfer rules. Bonvicini also adds Sybil Dosty, a 2008 graduate of Arizona State, to her coaching staff in 2015-16.

The team has several key dates to look forward to this season, including the opening of the newly renovated Connolly Complex. The Redhawks are set to host their first games in the new space in mid-December with the grand opening set for late January in conjunction with the second annual Women in Leadership game on Jan. 30. Five women of influence from the Seattle community will be honored at the event, with last year's honorees also scheduled to be in attendance.

The season kicks off Friday, Nov. 13, with Redhawk Madness, a doubleheader at KeyArena, as the women's team hosts Montana State at 4:30 p.m., followed by a rally on the concourse between games and the Redhawk men facing Arkansas-Pine Bluff at 7:30 p.m. Seattle U faculty and staff are entitled to two free tickets, subject to availability, for every regular season home game. At KeyArena, just visit the Box Office on the East side to pick up your free tickets on game day.

However, just because basketball season is starting, that does not mean that the fall sports are complete. On the same day, the cross country team will be competing in the NCAA West Regional at Jefferson Park Golf Course in Seattle starting at 12 noon. And at 5:30 p.m., the Seattle U men's soccer team will compete in the semifinals of the WAC Men's Soccer Tournament in Kansas City, Mo., as they look to clinch their spot in the NCAA Tournament for the second time in three years.

For all of the latest news in Seattle University Athletics, visit www.GoSeattleU.com. For ticket information, call 398-GOSU (4678).