In his newly published historical memoir Great Risks Had to be Taken: The Jesuit Response to the Second Vatican Council, 1958–2018, Patrick Howell, S.J., gives personal insight into how the Council impacted the Society of Jesus and precipitated a radical rethinking of the mission of the Jesuits today.

Father Howell, distinguished professor of theology at Seattle University, teaches the theology of Vatican II and contemporary Catholicism and brings a unique perspective to the nature and style of the Church prior to the Council and “an insider’s view” throughout his 58 years as a Jesuit in which he has met many of the personages, witnessed all the changes and been a direct participant in many of them. He has met several of the key persons in this history: Pedro Arrupe, S.J., Peter-Hans Kolvenbach, S.J., Pope John Paul II, Elizabeth Johnson, Archbishop Raymond Hunthausen, and a host of others.

Noted scholar on the history of the Jesuits John D. O’Malley, S.J., of Georgetown University, writes: “From the Second Vatican Council to the first Jesuit pope, Fr. Patrick Howell gives an informative, engaging account of being a Catholic priest as he tells the fascinating story . . . Anyone interested in Jesuit, Catholic, or American history will find this book a great read.”

Following is a Q&A with Father Howell on his latest book.

Q: What was your inspiration for the book?

Father Howell: I was writing an article for Conversations magazine on the subject of the Jesuit response to Vatican II. I called three Jesuit historian “experts.” None of them knew of any complete piece written on the subject—nothing in English, Italian or Spanish.

Father Howell: Pope John XXIII, who called for a council, was elected in 1958. Pope Francis, the first Jesuit pope, is now vigorously picking up the agenda of the Council. In addition, I wanted to describe my experience of the Church before and after the Council.

Q: What’s unique about your book?

Father Howell: It weaves both history and personal memoirs together. I was present at some of the major events or I met and knew some of the key personages, such as (noted theologian) Karl Rahner, S.J., Pope John Paul II, (former Jesuit Superior Generals) Fr. Pedro Arrupe and Fr. Peter-Hans Kolvenbach, Bishop Donald Wuerl and Archbishop Raymond Hunthausen.

This is the story of the transformation of the Jesuits from 1958 to 2018. Inspired by the Second Vatican Council, 1962 to 1965, which had been convoked by Pope John XXIII in January 1959, the Society of Jesus largely re-founded itself during these 60 years. It responded to the mandates of the Council with courage, obedience, integrity and fidelity. Its efforts were sometimes marked by mistakes and missteps, but it sought to discern the dynamic, surprising action of the Holy Spirit.

I have lived in the midst of all these changes since I was fortunate to have entered the Society of Jesus in 1961 just as the Council was about to get underway. It has been a terrific time to be a Jesuit, a priest, and a Catholic.

The strength of my perspective is that I had a glimpse of what the old society was like and the riches it had to offer, and I played a role within the unfolding of the 60-year discernment of wherever we were headed. My focus is necessarily that of an American Jesuit since I’m not equipped to handle the much broader, worldwide changes. However, some of these global changes directly affected the Society in the United States, so I describe some of their impact on the attitude and lives of American Jesuits. 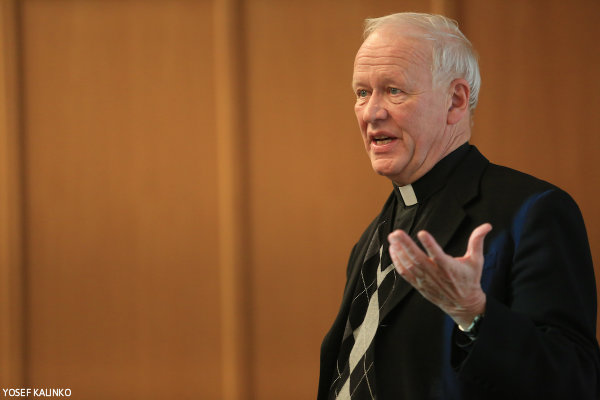 Q: Can you talk about the focus of the book?

My primary focus is the Society of Jesus’ response into the Council’s mandate to all religious orders to return to the sources of all Christian life, to retrieve the inspiration of its founder, and to adapt to the changing times. The Jesuits began the process immediately, but it took decades before the main features of the modern Society were in place.

We Jesuits are neither the ideals described in our founding Constitutions nor the sinister papal army described by our detractors. We are like the rest of society, a combination of strength and weakness, grace and sinfulness, energy and apathy. Our charism is a hard-earned realism inspired by the beauty of God who graces all things. Our General Congregation 32 in 1974 to 1975 gives an accurate account of what it is to be a Jesuit today. “It is to know that one is a sinner, yet called to be a companion of Jesus, as Ignatius was.” Our sinfulness and weakness teach us about God just as much, perhaps more, than our talents and strengths. We learn over many painful mishaps, we integrate that darker side into our spiritual autobiographies, and this unexpected grace becomes self-liberating.

Q: Where are the Jesuits at today in terms of the Second Vatican Council?

Father Howell: The year 2016 marked the 50th anniversary of the close of the Jesuits’ General Congregation 31 in 1966, which inaugurated the updating of all dimensions of our religious life and apostolic work. The year closed with GC 36, which elected a new Superior General Arturo Sosa from Venezuela to replace Father Adolfo Nicolás. Sosa is the first general of the Society born outside of Europe. So the span of 60 years is a particularly appropriate bracketing of time to discern how God has worked in and through the joys and sorrows, hopes and fears of the Jesuits in the midst of this transformation. In the book, I track some of the significant turning points in this journey and delve into key factors and world events which impacted the long-term outcome of the Second Vatican Council.

Great Risks Had to Be Taken is published by Cascade Books, an imprint of Wipf and Stock Publishers. Those wishing to purchase Father Howell’s new book can pick one up at the Arrupe Jesuit Residence, usually between 8 a.m. and 3 p.m. on weekdays. Or e-mail Father Howell directly at patrickh@seattleu.edu. Available for $25 at author’s discount (the book retails for $29 in a bookstore).