Anytime the Pope, UN Secretary General and International Olympic Committee President are in the same place at the same time something extraordinary must be afoot.

So what was it that brought Francis, Ban Ki-moon and Thomas Bach (among others) together last week? If your answer is "the first-ever global conference on faith and sport," you would be a winner. (Sorry, there's no prize other than the satisfaction of being right.)

The conference, titled Sport at the Service of Humanity, was organized and hosted by the Vatican. It attracted thought leaders, who "(looked) at how faith and sport can leverage their combined power and influence to promote positive values, inspire youth and make contributions for the betterment of humanity."

With the UN Secretary General and IOC President in attendance, the conference kicked off with an opening ceremony led by Pope Francis. It's not surprising that the soccer-loving Jesuit pontiff would be so invested in a gathering to explore the deeper dimension of sport. Nor is it surprising that SU's very own Pat Kelly, S.J., one of the world's foremost scholars on sport and spirituality, would play a role in the proceedings. Father Kelly, associate professor of theology and religious studies, served in the role of facilitator of a breakout session and presenter of the group's key findings. (He also managed to take the above photo of Pope Francis as he was arriving for the conference.)

A host of other luminaries joined Father Kelly at the conference, including current and former athletes, and leaders in government, the sports industry and non-profit sector. Many of the speakers were household, if not familiar, names, such as Val Ackerman (commissioner of the Big East Conference), John Mara (president and CEO of the New York Giants) and Timothy Shriver (chairman of Special Olympics International).

The subject matter taken up at the conference is very much in Father Kelly's wheelhouse. He teaches courses such as "The Soul of Sport: An Interdisciplinary Inquiry" and "Religion and Sport in a Global Context." He is author of Catholic Perspectives on Sports: From Medieval to Modern Times (Paulist Press, 2012) and the editor of Youth Sport and Spirituality: Catholic Perspectives (University of Notre Dame Press, 2015).

On his way back to SU's Jesuit sister school, Universidad Centroamericana in Nicaragua, where he's teaching this fall, Father Kelly took time to respond to a few questions from The Commons . Following are his thoughts on the conference.

The Commons: What do you think the Catholic Church accomplished with Sport at the Service of Humanity?

Father Kelly: I thought the Church made an important statement with the conference that it is serious about dialoguing with the world of sport. It truly was a global conference, with all parts of the world and many religious traditions represented. 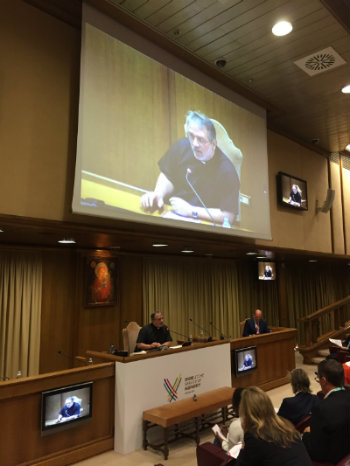 The Commons: In what way was Pope Francis' influence evident at the conference?

Father Kelly: Cardinal Walter Kasper has pointed out that Pope Francis' methodology is very Jesuit. He starts with human experience and then makes use of Ignatius' rules for discernment to try to understand how God is present, what the temptations are, etc.

I think with this conference we had a rich presentation of the human experience of sport, in professional and amateur contexts, and at the Special Olympics, Paralympics and Olympic Games. A part of this was about problems of exclusion of displaced children, people with disabilities, and in some contexts of girls and young women. We also heard about various forms of corruption, from performance enhancing drug use to the financial scandals at FIFA.

The Commons: What next steps do you think will come out of the conference?

Father Kelly: For those of us in the Catholic community, there is the next step of theological reflection and discernment on the human experience of sport. This conference wasn't the place to do that kind of reflection, because people were coming from many different contexts and traditions. But it is important that it happens.

We are only in the beginning stages of explicitly bringing the Catholic cultural and theological heritage to bear on the experience of contemporary sport. This is not to say that Catholics have not engaged with or thought about sport until now. They have, and I tried to show some of that history in my book Catholic Perspectives on Sports: From Medieval to Modern Times  and in other writing I have done.

I'm convinced the Catholic cultural and theological traditions have much to contribute to reflection on sport in the contemporary context.

The Commons: What can the Catholic Church offer in terms of our society's perspective on sport?

Father Kelly: In the United States, in particular, I think the Catholic tendency to accept play in terms of cultural history and to take play seriously intellectually offers a distinctive and much-needed perspective. I am including competitive activities such as sport under the heading of play. Part of our problem is that we tend to associate play only with what is trivial, or with frolicking on the beach. This happened in the context of the development of the work ethic and especially in the wake of the Industrial revolution, when work and play began to be understood as polar opposites. Work was seen as objective, and play as subjective, insubstantial.  With this cultural heritage, it has been much easier for the play element of sport to be marginalized.

By the play element I am referring at a minimum to enjoyment and engaging in the activity for intrinsic rewards. One often looks in vain even in youth sport for signs of play in our context. Especially in the last thirty years or so there has been a great emphasis for youth on early specialization in one sport and year round training, in order to get an advantage when it comes to looking for a college scholarship, or perhaps a professional career. This kind of instrumental approach moves in the opposite direction of enjoyment and intrinsic rewards. And we see two related problems arising out of it: overuse injuries for the young people training year round and alarming drop-out rates for many other young people who say that sport is no longer fun.

Visit Play Like a Champion to read the reports Father Kelly made while participating in Sport at the Service of Humanity. Additional coverage of the conference and Father Kelly's perspectives can be found at Catholic News Service.