It's considered bad luck to race a new rowing shell without a name, and Seattle University's newest boat was scheduled to make its competition debut in a few days after its delivery at the end of April. Women's rowing coach Jenny Park asked the team for suggestions. The "hands down" choice, says Park, was to name the shell after the same person who had christened all of its boats: Fr. Pat Kelly. 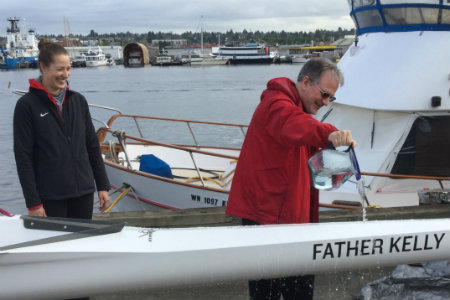 One morning during the last week in April, Fr. Kelly (above)  blessed the rowing shell named for him and christened it with a pitcher of water drawn from the Lake Washington Ship Canal adjacent to the Seattle Rowing Center in Queen Anne. (Apparently, champagne can damage fiberglass.)

Team member Taylor Woo ('19) explained why they chose to name the boat the "Father Kelly."

"Many of us took Fr. Kelly's Sport & Spirituality class. Some might think that these two subjects are unrelated. But our experience was very different," says Woo. "It was a privilege to get to know Fr. Kelly and his passion about all sports. He showed genuine interest in learning about rowing from us.  He has been a big support of our team. I could not imagine a better person to name our new boat after. We can't wait to see the many memories, gifts and joys this boat brings."

"Having your name on a rowing shell is a big deal and having someone christen it is a big deal," says coach Park. "It's bad luck to race in an unnamed shell which is why it happened so quickly."

Kelly says the team's decision felt like a real "gift" to him. "I was very touched by it and it means a lot to me. I also told them that I pray that they experience many gifts while rowing in this boat, especially of joy and friendship."

In addition to "Sport and Spirituality," Fr. Kelly teaches "Religion and Sport in a Global Context." He has conducted workshops nationally and internationally about sport and the flourishing of the person for student athletes.  He is the author of  Catholic Perspectives on Sports: From Medieval to Modern Times (Paulist, 2012) and the editor of Youth Sport and Spirituality: Catholic Perspectives (University of Notre Dame Press, 2015).