As anyone who knows Connie Kanter can attest, she likes to talk. A lot.

So imagine how surprised her colleagues were upon learning she was going on an eight-day, Ignatian silent  retreat. This had to be a joke-Connie Kanter?...Silent?...Wha?

But it was real and, in time, a pool was established with colleagues each guessing how far into the retreat Kanter would get before breaking her silence. About 140 faculty and staff were offered the chance to win a candy bar from the retreatant. Only four colleagues guessed she would make it all the way through without uttering a word.

What would possess someone as loquacious as Kanter to make an eight-day, Ignatian silent retreat, you might ask? It can be traced to her decision to join Seattle University in 2012 as chief financial officer and vice president of finance and business affairs. Kanter, who says she was drawn to the university's Jesuit values, immediately immersed herself in SU's culture and Ignatian heritage. She participated in the Arrupe Seminar, a yearlong examination of SU's Jesuit Catholic character.

This led to Kanter being invited to take part in the Ignatian Colleagues Program (ICP), an 18-month program for faculty, staff and administrators at Jesuit colleges and universities. The ICP-which Kanter describes as "the Arrupe Seminar on steroids"-includes a series of readings and seminars on the history of Jesuits and what it means to be an Ignatian institution; an immersion service trip; a capstone project (Kanter wrote an article on how Jesuit principles can be incorporated into financial decision making for the magazine Conversations ); and, yes, a silent retreat.

Making the retreat proved easier said than done. Kanter had to overcome numerous hurdles-family and work obligations-to find the time. A place  to retreat to was just as elusive. She applied to a highly demanded retreat house in Gloucester, Mass., but could not get in.

As it turns out her family has a small cabin in Port Townsend, Wash., just a few blocks from St. Mary Star of the Sea, whose pastor is none other than John Topel, S.J., a former faculty and administrator at Seattle U. Accustomed to seeing worshipers come out in droves for the Jesuit priest's masses, Kanter asked Tom Lucas, S.J., and Peter Ely, S.J., for help in getting connected with Father Topel. After a preliminary meeting in April, Father Topel agreed to serve as Kanter's spiritual director for the retreat. In late July, she reported to Port Townsend for eight days of deafening silence. 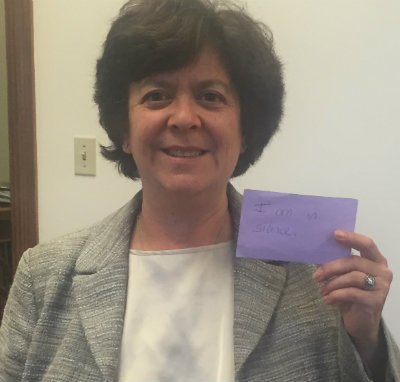 Connie Kanter, chief financial officer and vice president of finance and business affairs, holds the index card she used during her eight-day retreat. It reads: “I am in silence.”

Father Topel set out three goals for the retreat: get an intellectual understanding of the 30-day Spiritual Exercises of St. Ignatius upon which the eight-day version is based; develop a greater level of observation in her faith; and better grasp the mission of the Jesuits by understanding the teachings of Jesus.

Going into the retreat, Kanter was intrigued to personally experience the Exercises that she had read and heard so much about in the Arrupe Seminar and the ICP. So no problem with goal one. What about two and three-deepening her own faith and better understanding Jesus?

This is probably as good a time as any to mention that Kanter is an Orthodox Jew. "Christian theology is not my theology, so I approached (the contemplation of Jesus) totally from the head."

And yet she says that other facets of the retreat resonated as much with her heart as her mind, and in the ensuing months she has found herself being more mindful of her own spiritual practices. For instance, "There's a prayer Jews say immediately upon waking to thank God for restoring their soul and this is something I've become more diligent about," she says. "It's funny, because sometimes when I'm done saying the prayer, I say 'Thank you, Father John (Topel).'"

Kanter is grateful for the retreat experience. That's not to say it was easy. She says she was surprised at how exhausting the prayer and reflection was, even if it was broken up throughout the day. She wrestled a great deal with the Ignatian principle of indifference-or as St. Ignatius calls forth in the Exercises, "…a complete indifference with regard to all created things, not preferring health to sickness, riches to poverty, honor to humiliation, long life to a short one. We wish only for those conditions that will aid our pursuit of the goal for which we have been created."

"I'm thinking, that's just completely irrational to be indifferent between those two," says Kanter. "If what you're getting at is we should make the most of what we've got, (I'm) all there with you. I think I'm pretty resilient and understand that you take the cards that are dealt to you, but that's different from saying, 'I want you to deal me a bad hand or I don't care if you deal me a bad hand.'"

In time, she recognized that it was her own faith that keeping her from embracing the principle of indifference. "In the Jewish faith, we don't have this concept of redemption through suffering that Jesus modeled."

Not surprisingly, keeping the silence was a challenge for Kanter. Aside from her meetings with Father Topel, mum was the word. "Five days into it, I would've talked to a doorknob," she says. She kept her contact with the outside world to an absolute minimum. She texted home each day just to make sure everything was OK and checked her SU e-mail a few times-no more than twice a day. She laughingly calls it a very "Un-Jimmy Stewart experience," referring to Stewart's character George Bailey in "It's a Wonderful Life." Unlike Bailey, who discovered how empty the world would be if he didn't exist, Kanter says, "I'm looking at my e-mails and you see this person has a problem and then this other person fixes the problem. It made me feel completely unneeded, which remarkably made me feel better than I thought it would. I thought I had more of a need to be needed. Instead, I thought, 'What a great team-what great people work for me!'"

When Kanter ventured out for meals she carried an index card with the words "I am in silence" on one side and "Thanks" on the other. This mode of communicating, she adds, did not stand out as being all that odd in Port Townsend. "It's kind of a hippie town," she says with a smile. "If I did that in, say, New York, people would think I was out of my mind!"

Of course the question on everyone's mind is whether Kanter made it the full eight days without talking. Well, let's just say there are four colleagues who are happy to have earned themselves a free candy bar.