Local high school students came to Seattle University Feb. 11 for the third annual "Impact! Safe Schools," a student leadership conference in which law enforcement officials help students with strategies they can use to create safer school communities. The conference was covered by KUOW.

This year's program focused on race equity issues as well as recognizing cues for threats of violence, especially in social media. Associate Professor of School Psychology in the College of Education Sam Song, who facilitates the conference, said the topic was selected after the shooting of five Marysville-Pilchuck students last October. Past conferences have focused on hazing and bullying.

"The Impact conference will focus on empowering student leaders to go out to their schools and communities and lead change efforts for safer schools," Song said. "Without their involvement, students and their peers will never be able to adequately address issues of safety." 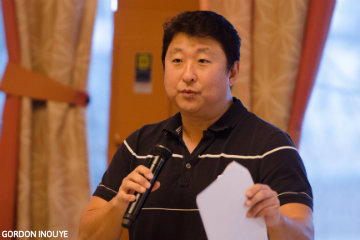 Speakers included Raul Palacious, a graduate student in SU's School Psychology program at the College of Education, who talked to students about the components of safe schools. Palacious assists Song in research into bully prevention and protective peer ecology programs as well as restorative justice. Also speaking were Claudia Bonilla of the Federal Bureau of Investigation, who addressed how students can recognize cues in social media for threats of violence, and Song, who addressed race and equity, in particular how cultural sensitivity and fair practices reduce bias and stereotype.

Students ended the day putting together action plans they can take back to their schools to help create safer school environments. The goal was for students to become leaders and share ownership in solving problems in their schools. "As usual, the focus is on what students can do about it-empowerment!" says Song.