Two Seattle University School of Law students had a remarkable opportunity to stand by Gov. Jay Inslee as he signed a bill they had a hand in creating during legislative externships with Adjunct Professor Pam Crone.

Rachel Bryant and Alex Kory, both 3Ls, were invited to the signing of the bill that clarifies the applicability of child abduction statutes to residential provisions ordered by a court. Bryant testified in favor of the bill before the House Judiciary Committee and the Senate Law and Justice Committee when she was a legislative extern with the Washington State Coalition Against Domestic Violence during the 2014 session. Due to the short session, the bill never passed. 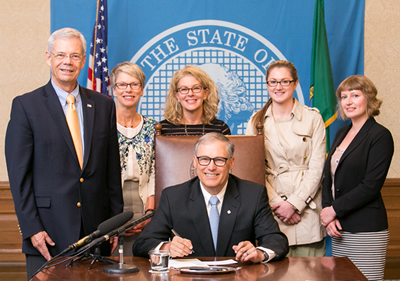 When the bill came up again this session, Kory, an extern with Legal Voice, prepared talking points and testified before the House Judiciary committee once and the Senate Law and Justice committee twice in support.
Crone, a lawyer and lobbyist for the Washington State Coalition Against Domestic Violence and Legal Voice, teaches the Legislative Externship seminar that accompanied their externship.

"Today was a great day," Bryant said. "It's an incredible feeling to be able to work on issues that I am so passionate about with people who are just as passionate as I am. I am grateful to have had the opportunity to work on such an important issue in a way that will have a lasting impact."

The bill responds to a Washington State Supreme Court case that held that court orders other than parenting plans are not currently elements of the crime of custodial interference. The Supreme Court's decision in  State v. Veliz  left a loophole that failed to recognize residential provisions in domestic violence protection orders. This is a small, but important, step to fix this loophole.

"With so much of law school aimed at direct client services and courtroom advocacy, the opportunity to do a legislative externship has expanded my experience with and understanding of the law more than I could have imagined," Kory said. "Pam Crone is an amazing advocate and mentor and I am grateful to have had her as a professor for the legislative externship.