If you haven't yet met up with Redhawk Rob, give him a Google.

You're about to discover one of Seattle University's most interesting characters, a campus comic whose offbeat videos continue to attract new devotees, from prospective students to members of the executive leadership.

Redhawk Rob and his "Robert Report" are the brainchildren of James Cashman, '15. It was the winter of Cashman's freshman year and he wanted an outlet to express his high-spirited and genuine enthusiasm for his decision to come to SU.

Cashman's knack for improvisation dates back to his high school days at Bellarmine College Prep in San Jose, Calif. Even then, he saw improvisational comedy as his creative wonderland.

Thanks to his roommate Jacob Swanson, '15, Cashman saw a quirky Old Milwaukee beer commercial featuring film star and comedian Will Ferrell that inspired him to make videos about his SU experience. That might sound like a big leap, but the freewheelin' Ferrell's unscripted beer ads gave Cashman fresh ideas for expanding his comedy repertoire. 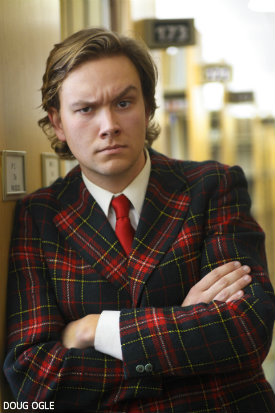 Cashman's earliest campus videos-before he adopted the Redhawk Rob persona-were acronyms full of his exuberant earnestness. He spelled out S-E-A-T-T-L-E U-N-I-V-E-R-S-I-T-Y and came up with a positive word for each letter as he went along.

Three years ago, he had a part-time job in the Admissions Office as a Student Telephone Admissions Representative (STAR), a foreshadowing for what was to come.

It wasn't long before Cashman, who switched his major from creative writing to film studies, became part of a media production team. Undergraduate Admissions Counselor Zach Gerdes, '11, oversees the operation and Lars Andersen, '14, another film studies major, is cameraman.

"After a colleague showed me some of his film work," says Gerdes, "I knew we had to embrace his potential as a budding filmmaker and comic genius."

It takes about a week for a rough cut and typically three weeks from filming to final cut for a new Robert Report episode in the continuing saga of the goofy Redhawk Rob.

Among other topics, the videos have tackled food on campus (with a cameo from SU Executive Vice President Tim Leary), Division One Athletics and the Eisiminger Fitness Center, Quadstock, Public Safety and Segways, a student club fair, Lemieux Library and McGoldrick Learning Commons and the Center for Service and Community Engagement. They set up a cash cage (like the TV quiz show "Cash Cab") in a residence hall elevator for another. They did a spoof on a Brad Pitt cologne ad for yet another.

"The college admissions field is saturated with cheesy videos," Gerdes says. "'Redhawk Rob' embraces the cheesy with a refreshing, zesty flare of irony and humor; and James Cashman is nothing if not refreshing and zesty. We are lucky to have him."

To see Cashman at work is like scoring a front-row seat for TV's "Saturday Night Live" or standing-room-only for "The [206]," the late-night local comedy show.

As you watch the videos, you can't help thinking Cashman is related to Northwest comedian, television and radio personality Pat Cashman and his son Chris, who star on "The [206]." They share the same last name, after all, and they all shine at sketch comedy.

"Nope, no relation, but I get asked that a lot," says Cashman with a shrug.

What does the future hold for him?

"I've had incredible opportunities at this school, in Admissions, with Redhawk Rob and all over this campus. I'd like to become a filmmaker, but I realize it doesn't come with a snap of the fingers. I'd love to work for 'Second City' in Chicago," he says.

Until then, SU has the good fortune to have James Cashman on campus.