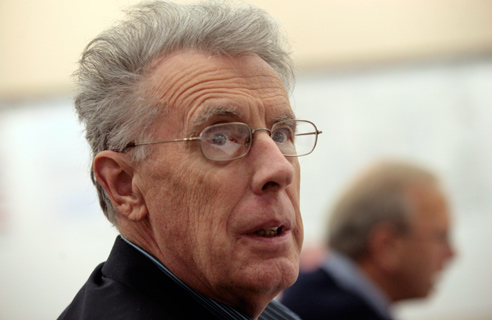 The National Academy of Engineering (NAE) has conferred one of its highest honors on John Hopcroft (’61, Electrical Engineering).

At its annual meeting earlier this month, the academy presented the Simon Ramo Founders Award to Hopcroft for his outstanding research contributions and leadership in engineering. Here’s what NAE wrote in their release:

“John E. Hopcroft is widely regarded as one of the most influential computer scientists in the United States. With the Simon Ramo Founders Award, Hopcroft is being recognized ‘for fundamental achievements in the formation of computer science as a discipline through his research, service, and pioneering textbooks.’ The award acknowledges outstanding professional, educational, and personal achievements to the benefit of society and includes a commemorative medal.

“Hopcroft, who is the IBM Professor of Engineering and Applied Mathematics in Computer Science at Cornell University, has worked on shaping the intellectual discipline of computer science, specifically on theoretical aspects of the field, and helped make computer science the respected discipline that it is today."

The release goes on to detail some of Hopcroft’s contributions to his field:

“In 1989, Hopcroft co-authored ‘Computer Science: Achievement and Opportunities’ as part of his effort to double the number of computer science PhDs produced each year in order to meet the nation's future needs. In 1992, President George H.W. Bush appointed him to the National Science Board, which oversees the National Science Foundation, and he served through May 1998. In 2005, he co-chaired the National Research Council study committee that produced the report ‘Network Science,’ which helped the Army understand the engineering behind networking troops in the field and how it would change warfare. The report has been said to have led to significant increases for funding in network science from numerous agencies.  Hopcroft’s research has also helped shape curriculum at computer science departments as they increased around the world.  He has received many awards for his achievements, including the A.M. Turing Award, the ACM Karl V. Karlstrom Outstanding Educator Award, and China’s Friendship Medal, its highest recognition for a foreigner. Hopcroft is also a designated Einstein professor of the Chinese Academy of Sciences.”

After spending three years on the faculty at Princeton University, he joined the faculty at Cornell University where he served as chair of computer science for five years and dean of engineering for seven years. He continues to teach as a professor at Cornell.